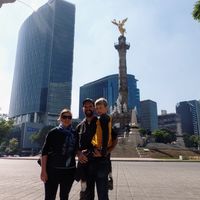 We are an easy going couple who were joined by our son Hank in Decemeber of 2009. Until his birth we were very active in CS, but decided to take a year off to learn and get used to our new life with him. However we are now returning to CS, so that our son will be able to experience the great people and experiences that we have.

Travel is fatal to prejudice, bigotry, and narrow-mindedness, and many of our people need it sorely on these accounts. Broad, wholesome, charitable views of men and things cannot be acquired by vegetating in one little corner of the earth all one's lifetime.
- Mark Twain

"Life has got a habit of not standing hitched. You got to ride it like you find it. You got to change with it. If a day goes by that don't change some of your old notions for new ones, that is just about like trying to milk a dead cow." Woody Guthrie

Many years of hosting and surfing

Movies and Stuff: anything Wes Anderson, anything by Danny Boyle, Eternal Sunshine of the Spotless Mind, Arrested Development, The Godfather trilogy, Big Lebowski, Fargo (and most Coen Brothers Stuff)

One of my greatest memories was in Wind Cave National Park, watching a herd of Buffalo play in a pasture. It seems minor, but so beautiful to watch such a magnificent creature.

Vonny would like to learn how to surf someday. I think it looks fun.