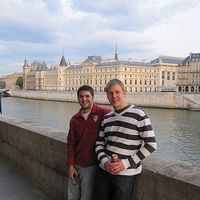 Get busy living, or get busy dying AND get picked up in a Westfalia while hitching

I was a math major and nerd. I love talking to strangers. I'm a teacher. I've hitch hiked around the world. I've coached swimming and taught swim lesson for many years. I'm a Christian but open-minded and non-proselytizing. I'm an American and a Hoosier (a resident of the state of Indiana, haha.) I'm a craft beer junkie. I'm learning Krav Maga. I love traveling and different cultures. I'm often caught between vagrant (hitcher, traveler) and professional (teacher who aspires to one day get a Ph.D.)

I often wonder, "What's this person's story? How have we crossed paths? What are they doing today? This week? This month?"

Travel to me is about much more than sight-seeing and snapping a photo. While I do enjoy that aspect, I am much more interested in the people of different regions. Traveling, to me, is like working in the services industry. Everyone who's ever worked in the services industry treats others in the industry better because their perspective has been changed; they have a broader world view. Likewise, traveling and meeting people of different cultures opens the lens through which one sees the world.

PS: while I'm open minded and love learning about different cultures (I've intentionally sought out proselytizing groups, such as Mormons, just to learn about their beliefs), I do have convictions, some of them pretty strong. I'm a total math/science guy who also has a strong interest in parts of the humanities (civics, psych and soc., economics) but some of my best CSing experiences were with super artsy people, which I am definitely not. However, if you're an ardent communist, I'd suggest you redirect your couch request about 125 miles (200 km) northwest of here, and let me know how Utopian your stay is! Oh, and get off your computer, phone, and social networks that the big bad multinational companies produced for you.

If reading five Bible verses scares you away, is it the religious who're closed-minded? 0_o

"Do not neglect to show hospitality to strangers, for by doing that some have entertained angels without knowing it." - Hebrews 13:2

"Be hospitable to one another without complaining." - 1 Peter 4:9

"Contribute to the needs of the saints; extend hospitality to strangers." - Romans 12:13

"He said also to the one who had invited him, "When you give a luncheon or a dinner, do not invite your friends or your brothers or your relatives or rich neighbors, in case they may invite you in return, and you would be repaid. But when you give a banquet, invite the poor, the crippled, the lame, and the blind." - Luke 14:12-13

"But wanting to justify himself, he asked Jesus, "And who is my neighbor?" Jesus replied, "A man was going down from Jerusalem to Jericho, and fell into the hands of robbers, who stripped him, beat him, and went away, leaving him half dead. Now by chance a priest was going down that road; and when he saw him, he passed by on the other side. So likewise a Levite, when he came to the place and saw him, passed by on the other side. But a Samaritan while traveling came near him; and when he saw him, he was moved with pity. He went to him and bandaged his wounds, having poured oil and wine on them. Then he put him on his own animal, brought him to an inn, and took care of him. The next day he took out two denarii, gave them to the innkeeper, and said, "Take care of him; and when I come back, I will repay you whatever more you spend.' Which of these three, do you think, was a neighbor to the man who fell into the hands of the robbers?" He said, "The one who showed him mercy." Jesus said to him, "Go and do likewise."" - The Good Samaritan, Luke 10:29-37

I surf and host. And now (April 24th, 2012), am a Seoul Emergency Couch Request moderator.

Some people are good, some people are great. Though a deep personal connection isn't always established, you always meet generous and nice people from all over the world.

Traveling, hiking, hitch hiking, living a healthy, sustainable lifestyle, craft brew, riding my bicycle to work. I also enjoy math, history, politics, news, (boring, I know, but hey, have to try to understand the world we live in, right.) I've always been interested in the intellectual aspect of theology, but have recently take a keen interest in more spiritual endeavors like Sufism (Islam), Hasidism (Judaism), and Buddhism in general.

visited 11 states (4.88%)Create your own visited map of The World or website vertaling duits?

Books: anything by Clive Cusser, One Flew Over the Cuckoo's Nest, 1984, Night, The Alchemist

Hitch hiking odometer: 12,000 miles (19,300 km) in across North America and Europe of which I've slept many nights under the stars, met a Tibetan political refugee, went down a lot of the Pacific Coast Highway, met a European healthcare millionaire, had one of the best steak dinners and homemade beer in my life, talked to a homeless man who taught me many lessons about life, and saw a guy who picked me up do heroine.