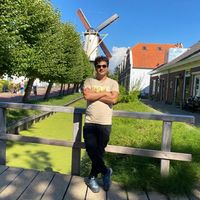 I am a modern times nomad, an airport addict.

Currently based in Brussels.

Lived in 8, travelled around 40 countries :)

Sharing is living and that's why I am on Couchsurfing! Exchanging stories, languages, experiencing together, that is when you enjoy your life the most to me.

I am also very fond of literature of football for all kinds, have a huge library reserve for it :)

I have a nice central house in Brussels to welcome travellers. Open to hang out, have a coffee or drink as well. A cozy and warm atmosphere guaranteed :)