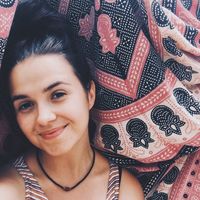 I am very passionate about traveling and meeting new people especially from different cultures as it always gives you a new perspective of seeing things. I love to talk about all kinds of things and learn from the conversations I have with other people. I am open-minded , I love to laugh (a lot) and trying to be more spontaneous

I think Couchsurfing is a nice way of meeting new people and also to get to know better the country you travel to.

Favourite movies: Coffee and cigarettes, Mood Indigo, The Hunt, Noi the Albine, Inside Llewyn Davis, Song of the Sea