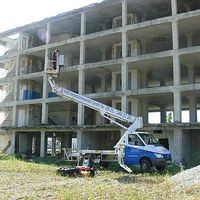 I'm a photographer interested in many kinds of art and cultures. I love the nature but I'm also a bit technophile.
I also like cooking with fresh food in almost all variations.

Don't get normal and being spontaneous...

I think it's a great idea to get a better view of the world if you not only visit foreign places planed by travel agencies.

Got hosted in "emergency". Thank you, Grace!!! You gave me a very well opinion to CouchSurfing!

My first organized CouchSurfing-Event was a great success. Thanks to everybody who joined my housewarming party!

I hope I can make many CouchSurfers happy with the couch in my flat.

While I host for about two years I have had very interesting, crazy, cool people around me and made friends around the world.

As a photographer I often experience crazy stories. Because there is a little crazy mind behind... One time I planed a big shooting which was in the end fully improvised because a few things went wrong the days before. Finally the fire brigade came over with about five fire trucks and an ambulance ahead. There was nothing out of control but one of the neighbours called them because we made a big firewall in an old military building that was cored. But I had an authorisation from the owner of course...

I can share my knowledge about photography. Basics, techniques, ...