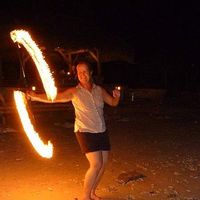 My goal is to see this amazing world we live in, to experience all that it has to offer, and to meet as many people as possible!

I have lived in Italy and England, but call Florida in the US my home.

In 2007, I took my longest trip. It was a seven-week, seven-country journey of 20,000 miles across the South Pacific from Australia to Hawaii. I am an active traveler, and do not "vacation". I "travel". I like to see everything a place has to offer; I rarely just sit on a beach (well, I did in the South Pacific. . . but I also went 4WD-ing, snorkeling, kayaking, to museums, to national parks, ate exotic food. . . you get the idea).

At home, I do a radio program called "Lady Lawyer Live" that disseminates legal information to callers; the format is a live, call-in show.

I am very active with local charities and civic organizations. My most active involvements currently include Meals On Wheels supplying 4700 meals a month to shut-ins; raising funds for a handicapped children's playground; and Kiwanis (I am a life member).

I am a social drinker and non-smoker. I have a kitten named STAR (my 19-year old cat and bird recently passed away).

Travel companions interested in historical sights and cultural immersion in less-touristy places. Also, adventureadventurers interested in renting a rickshaw (a/k/a tuktuk) and traveling for a week.

***On April 17, 2018, I was asked to be one of the six CS Country Ambassadors for the US (my Territory is Florida, Georgia, Louisiana, Arkansas, Mississippi, Alabama, Puerto Rico and the US Virgin Islands.)(Update: August 2020: We are now FIVE AMBs)

Previously, I volunteered as a CS Country Ambassador (USA from 6/17/08 to the end of that Ambassador program in February 2011)(my regional territory was Louisiana, Mississippi, Alabama and South Florida; there were 15 Country AMBs in 2011); prior to and following being a Country AMB for two periods, I volunteered as City Ambassador for Winter Haven, Florida [until the City AMB program was modified to a general AMB program by CS in August 2013 (and again in April 2022); as of March of 2018, there were 332 General Ambassadors for CS].

***I MODERATE the "POLK COUNTY FLORIDA" CS Group and organize their monthly socials! The Group site contains links to restaurants, attractions and visitors bureaus for CENTRAL FLORIDA; so I encourage you to use it as a resource to plan time in this great part of Florida! Direct URL is:

***I am most well known for running events - - at home around Central Florida and abroad when I travel!

***I actively promote CS off the site - - through speaking engagements (on the radio, and at civic clubs) and other social media (facebook).

***I was one of the 'responsible' Ambassadors concerning couches in Peru, Costa Rica, Puerto Rico and Panama. Yeah, that's a big title for a small job ;-)

***I have served on two Working Committees: New Member Greeting, and Event Invitation Approvals. I have approved more than 150 events worldwide; it is so fun to see the creative event ideas that CSers come up with! As a New Member Greeter starting in 2008, I personally welcomed over 2150 people to the CS Family!
Starting in 2018, via computer-assisted greeting, I've corresponded with at least 300 more people.

***I am actively seeking ways to creatively help other CS members. . . for instance, I organized a photography display in my city for a CSer living in Berlin, and a watercolor display for a CS artist friend from Stuart.

***I enjoy helping communities establish active CS groups and monthly events. I enjoy mentoring new members and other CS leaders that are just starting to be active.

Some of the More Unusual Events were:

***I am pleased to have met, traveled with, CS'd with, dined with or done a CS social with these 1222 great people, whom I have met IN PERSON:

Since I joined CS in July of 2007, I have become embroiled in it!

I just re-started "Three Cups of Tea" about girls' education in Pakistan. I am reading Steinbeck's books for the first time since college.

I read the WSJ daily..

I read "International Travel News" Magazine cover to cover on day of arrival (I write for them several times per year, but despite that it is The Most Amazing Magazine for intrepid travelers... you can get a free copy on their website).

Like many CSers, I regularly have one or two (or more) travel guidebooks on my coffee table!

I cannot pick one thing as life is full of unique experiences, but I offer these amazing experiences that will affect me for the rest of my life:

Seeing Mount Everest; experiencing Iguazu Falls in South America; horseback riding in the Andes; being on a rumbling volcano; viewing the Pyramids for the first time from the top of a camel; holding a koala in Australia; digging out of mud ruts that were three feet deep while 4WD-ing in Bora Bora; kayaking around the Bay of Islands in New Zealand; climbing to the highest point on China's great wall; getting emotional at the Taj Mahal; seeing Everest's peak clearly; riding an ostrich in South Africa; petting a cheetah and a giraffe in South Africa; seeing a pod of Orca Killer Whales in Antarctica; attending a Voodoo ceremony and going to the Python Temple in Benin; and being there when a friend needs me, even if it is 3 am.

**I am a good amateur PHOTOGRAPHER. . . self-trained, but I have had four public showings of my work:
"Travel Photography from Every Continent" (35 mm);
"Southeastern Asian Panoramic Photography";
"Antelope Slot Canyon Nature Photography" (35 mm);
"Local Color from South America -- Candid People Photographs in Traditional Clothing".
In November 2012, I received my first invitation to do a paid photography job (a family portrait)! My second paid job was May 2013 with a professional portrait for an executive.

I am currently negotiating additional displays titled
"US National Park Photographs"; and
"Educating Hopefuls in Pakistan".

**I do some TRAVEL WRITING, as I love to share "how to" information about traveling.

Pending publications are "Travel in SE Asia's Newest Country, Timor-Leste", "Travel Like a Local in Antigua" and "A Lawyer's Guide to Decoding Travel Brochures".

I have been published for contributed comments to LONELY PLANETs "LONDON"; "DOMINICAN REPUBLIC AND HAITI (2012)" and the Italian version on England "Inghilterra"(5th edition; 2009) guidebooks.

**I am working on my meditation skills, and want to LEARN more.

**I went to my first Latin Dance Lesson at a CS event and enjoyed it; need to learn more.

**I have been studying Spanish for a couple of years, and need to practice more.

** TO LEARN MORE ABOUT POLK COUNTY in CENTRAL FLORIDA just SOUTH OF ORLANDO, HELPFUL WEBSITES AND INFORMATION ON THE POLK COUNTY CS GROUP's SOCIALS AND ACTIVITIES CAN BE FOUND AT:

http://www.couchsurfing.com/group.html?gid=6559
(The link in my 'group' listing works better than this link).

TRAVEL STORIES from around the Globe are my specialty!