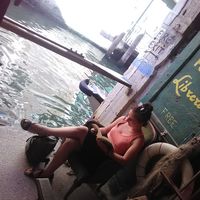 I am a french girl of 21 doing a gap year from September 2018 to September 2019. During this period I would like to discover Hungary and maybe some neighboring countries. So, I try to learn some basis of Hungarian language but currently if you are Hungarian or not Hungarian it is the same, you will not understand at all !
For me a good mean to meet and know new people is to share instants of walking, visiting moutains or forests. Other point: board games are useful to understand better someone and it can lead to a new friendship. I would say the same for video games.
Open mind and tolerance are the most important for me. I like to share discussions, about ways of life, philosophy, politic too, travels or others interesting subjects, but thinkingless of judgements.

I was on Couch Surfing since 2015 but I never really used it. This time, as I want to go to Hungary, meet Hungarian people is beginning more and more important. I want to discover this culture which is new for me and fascinating.

*What is very important for each day: find a moment to read, keep informed of actuality, find an instant to do sport (as well swimming, running, walking, riding...).
*What is important to do sometimes: organize travels to go to see friends or new places, take little more time to cook, think to fulfill the films' list by watching these films :)
*What would be important during this gap year: take time to train my Hungarian language learning, involve myself in associative commitments, write.

I took a beer in the middle of a frozen lake. I was with a friend in a bark and we worked hard in the ice to reach the centre of the lake.

Languages are so mysterious. So I can teach some stuffs of my own language which is so marvellous ! If you speak to me in your native language I would be glad ! We can share musics from the four corners of the world, I am very curious about these ones and I frequently try to discover new ones.

I love cooking ! In France we have some specialities, as crêpes, quiches, tartes aux pommes etc. but I can also prepare that I such to do for myself: spiced dishes with rice, similar to Indian cooking.
I am pretty curious and I think I am a good listener by nature.