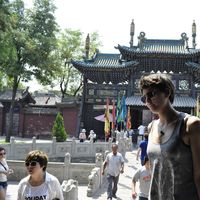 I'm a just graduated Design student, and I love getting to know people, and new places. Love animals, specially dogs. I love drawing in sketchbooks that I carry everywhere, and I'm constantly thinking. Always. About the most random stuff.

I'm on couchsurfing because I love to get to know people, and cultures. It's a great way to "feel" a place from the host perspective, and learn from it.

When I saw snow for the first time - me, my brother and father were coming out of a visit on a cave formed by lava - an excavation part - , was really cold, but when we went out, there were this little white things I've never saw before, and it was just awesome, I was really happy, later happened the first blizzard of the year! - Pucon, Argentina

When I saw a dolphin for the first time. It was in an small island, in Brazil, we were in a school trip, we were waiting for the boat to take us back to the other side, and a lot of dolphins came close (not so much) from the beach, but we could see them perfectly, the scenario was amazing, it was at the sunset, just amazing.

When I saw the Pantheon, in Rome, Italy - we walked the hole day in the city, we were in this street and, although I knew we were going there, when I saw that huge building... It was like being punched in my stomach. It took my breath away!

I can show you multiple ways to eat ice cream. Toppings are never enough (unless it's gelato. They are perfect the way they are). I could cook or help at home. We could have some out of the box conversations, or be in silent at the same place, doing our things, just enjoying time together, not afraid of the silence. Both are fine with me :)
I could also draw something. Or even go out for a walk with the dogs :D