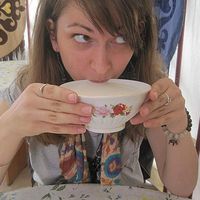 Last year I traveled to the unknown, mostly by cycling south in East Asia avoiding cold and winter! This year I'm rediscovering my home country that I left so long ago and then politely move on to greener pastures when I get bored.

I really love learning how to cook _your_ favorite dish.
I have only one addiction: swinging. I love playgrounds but only for the right reason.
I have a really wicked Eastern-European accent.

UPDATE :) Just to be clear (because people have thought otherwise): I speak Hungarian, English and some Spanish, French and Russian. The rest was added by my previous Couchsurfer on a lovely summer morning when I left my profile logged in. If you speak any of those languages, please write something in it or send me a song. I would love to know how they sound like!

Also, the picture of the Pope ended up among my pictures the same way.

Since I've been on ice a lot lately, my philosophy has become: If I have to fall, I fall.

I used to offer my couch to Couchsurfers while I was in Almaty, Kazakhstan then hit the road around Asia often wishing I had been such a great host as my hosts were. Now I'm back in Budapest setting up a new temporary home and loving the love this city has become since I left.

I had my very first CS experience in Norway in early 2013 and I found it so amazing that I decided to open my doors to fellow travelers. It was one of the best decisions I ever made as my life got a lot richer in stories and experiences, all thanks to CS.

I love all kinds of music, mostly what comes out of my friends' speakers. When it comes to books I like historical ones, biographies and academic stuff.

Took a 10-day-long trip with my friends in Uzbekistan without any major preparation, just going where we felt like.

Went for a round trip with a CSer in Norway to meet my first CS host and decided to sign up!

Read French poetry in a mall in Xining (China)and got an unusually big amount of money.

Climbed the Great Wall at a section that's not open to the public and known to be dangerous ... in sandals. It was a very scary experience but in retrospect it's just another great adventure.

Fund raised most of my ticket price for my train to Ulanbator on the spot at the train station and traveled on a group ticked with a hundred construction workers. It was one of the funniest train rides I've ever had.

Bought an age-old second hand Korean mountain bike in Ulanbator and cycled to Beijing with broken brakes, totally dead gears, 20+ punctures and had tons of fun!

Couldn't live without a bike for too much longer so I bought a newer (still second-hand) Chinese mountain bike and hit the road south. We'll see how far I get...

Rented a kayak with a friend for three days and organized our very independent kayak tour around Cat Ba island in Vietnam, camped out at our very own paradise beaches every night, when on the last night our campsite got almost flushed away by the high tide (that had been totally fine the day before) so we had to evacuate. Night kayaking was great as both the sea and the sky were gorgeous and we found a floating fishing village where we found refuge until sunrise (also, a dog bit me and I had to get weird vaccination but it's just another great story now).

Helped organize the biggest Christmas and NYE parties at a beach club in the sunny Mui Ne (South Vietnam) and had the best time.

Cycled through South Vietnam, Cambodia and Northern Thailand to see all the nice and ugly parts of SE Asia.

Worked for a month in a hostel in Laos and loved the new hostel family we were.

Went to Myanmar and almost died in a hospital. Seriously, great times. But when I wasn't half-dead I really enjoyed the water festival.

I enjoy learning how local people cook and I can entertain them with stories and my own recipes in exchange.