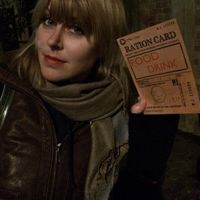 The only thing that's left to do is live...

***please note if you have no references, nothing on your profile, and no profile picture, or are requesting to stay with less than a days notice I will not be able to host you***

British girl living and working in NZ. Charity shop bargain hunter and curious old stick. Keen to learn more about the world and the people in it. Passion for working and volunteering with charities and not for profit organisations.

I live by a code of honour mainly involving beer and cake ;)

By being part of the world.

I have travelled, and hosted and drunk with other CSers.

I've also taken part in various sporting events, including the London Marathon, various half marathons, off road assault courses, and trekking the highest peaks in the UK!

Watching the sun set in the Himalayas. Volunteering at a hospice in Delhi. My favourite experiences in my lifetime (so far)have been backpacking in India and Cuba.

Oh, and I once met the Chuckle Brothers...(this probably won't mean anything to anyone who did not grow up in the UK in the 1980s)