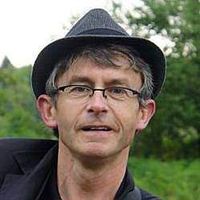 I am not an astronaut, I don't have a mission. "Leave the world a slightly better place than you found it, or at least no worse" - which is obviously a cliché.

ABOUT ME
Married, 3 children, work in various areas connected with language. Have lived in different European countries and I see myself as a European, I enjoy discovering Europe's more obscure river valleys, coastlines, castles, monasteries, border areas and astonishingly rich history, staying with CS hosts as I cycle from country to country. I read widely, play a lot of music on different instruments, front a band (www.yellowbelly.de) like jogging, cycling, nature, being off the beaten paths, hanging out with my family, literature, pop science, politics, going to gym, going for very long walks, birds, and talking about all the above.

Why don't they make everything out of that black box stuff? Is that a philosophy?

Mostly as a host. My wife participates as a host as much as I do and my children enjoy meeting our CS guests too (many of our CS guests are much closer to my children's ages than to ours). I have also couchsurfed myself but only on long-distance cycling trips with the sky above me and a small musical instrument somewhere in my rucksack. I don't really think that Couchsurfers need to be "amazing", normal, friendly people who use CS are just fine. But we do think that couchsurfing should be about meeting and connecting with people, and requests that are obviously copied and pasted where it is clear the profile has not been read will be politely refused. So if you'd like to make a request please mention the name of our cat, Lilly. And I'm afraid we don't host people who are travelling in order to work at trade fairs, we feel this turns the CS experience into a free hotel and that's not really the principle behind it. The local university also has its own accomodation office!

COUCHSURFING EXPERIENCE
More as a host than a guest. I joined Couchsurfing in 2014 but already hosted lots of people from all over the world. Couchsurfed my way from Nürnberg to Rotterdam by bike in August 2014 and then again in 2015 and 16, then to Lithuania in 2017 - had a wonderful time, met fantastic Couchsurfing hosts.

Don't really have favorites. I have 34 musical instruments at home and lots of novels, pop science, history and other non-fiction. Have been listening to the creative mandolin player Simon Mayor and US singer Laura Gibson and reading Chekov and a book about molluscs recently, if that helps. It probably doesn't help.

Played gigs in the prison where the Nazi war criminals were executed. (Captive audience!) Watched an adult blue whale feeding 6 meters away from me off a boat from Monterey. Discovered the world's finest human being and married her. Actually I am very critical of most aspects of existence, and allergic to seeing stuff as "amazing" (or "awesome"). The writer Julian Barnes says you never actually 'do' anything - the universe happens to you.

Have been teaching for 26 years in 4 countries. Can teach you to play any instrument with frets, languages, and will drone on at you about books you should read! Will happily listen to the same.

A bed, the same nourishing food that we eat, a cat that will run away from you, a terrace to chill out in if the sun is shining, conversation, a map of Nürnberg, a bike if you want to borrow one.