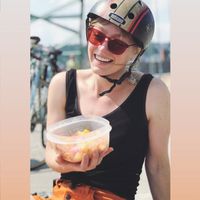 I fancy...
-- meeting by chance and having a day full of spontaneity.
-- surprises and surprising (adjective and verb) people.
-- cooking (usually breakfast-- I really love breakfast) with and for others.
-- playing tour guide (by foot or bike).
-- smashing my haus with old and new friends. let's break stuff!

Host, hang out with the PGH CS community and profess my love for Couchsurfing to strangers and inanimate objects.

Once upon a time, I watched the moon's sliver shine beautifully, spin out of control, crack in half and explode. It may have been in a dream, but it was real to me.

Once upon a road, I saw a helicopter fly sideways down a narrow street between tall buildings for the Batman filming in Pittsburgh.

Once upon a roof, I watched a man jump off of a building, fly, live, and live.

Twice upon a bike, Biked a whole bunch without a truly bad human to be found. Truly amazing given what many are so eager to warn you of in this world.