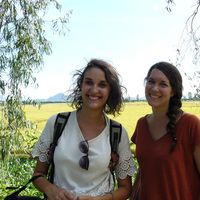 To learn Spanish (with the idea of visiting South America one day!)

I'm a French girl from Montpellier, living in Pointe Noire (Congo ). I'm there for a year, and I will be working as a librarian/ book project manager for the French Institute. I've just arrived in the country, but I'll be glad to host you if you happen to be one of the rare tourists endding up there :)

I've already travelled alone in Ireland, Italy, sweden and asia (Cambodia and thailand) so I would say I'm quite independant for my age. I like the concept of couchsurfing because one of the things I like most is to meet people from all around the world and to create (for a long time or not) links with autochtones in order to discover customs, cities and culture I'm not familiar with.

About films I usually love films such as all the Wes Andersen's,Inarritu's, Dolan's, Woody Allen's, Honoré's Sorrentino's etc but I'm open-minded and can appreciate a lot of films (except blockbusters and horror!)

French cuisine, French culture, and all the experiences I had around the world :)