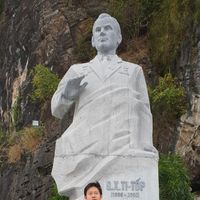 Hello! My name is Leon and I originally come from a small city in South-East Asia, Singapore. One interesting fact about me is that I'm actually born in France, in the city of Lyon where my parents were on honeymoon, and my Mum gave birth to me there so they named me after this city and I moved to Korea for 5 years before moving to my Fatherland.

I have worked and travelled extensively across the globe in some of the world's most challenging and unpredictable environments in 34 countries totalling over 500 days outside my home country. Starting in my job industry from childhood, I'm self-taught and learnt the ropes of leading industry experts and honed my craft further based on high standards and integrity. Due to my job, I have always been very grateful that I could travel and work remotely from anywhere in the world.

I believe everyone should have the freedom to travel irregardless of your financial situation. Travelling should be affordable and least expensive it can be for everyone and I love the whole concept of this website where you can connect with people from all over the world and experience the local culture without spending an arm and a leg. Before I signed up on Couchsurfing, I've actually hosted quite a number of people I met during my travels.

I'm also on another website called workaway which is similar to this website except that you do work in exchange for accommodation. I was introduced to it by my sister who took me to a meditation center in the outskirt of Thailand where it's the most beautiful paradise I've seen in Thailand. During this workaway, I've met some of the most amazing people who've become my lifelong friends, and later we even met up again and we travelled to Chiangmai to celebrate Songkran. Songkran is like a Happy New Year holiday in Thailand from the 13 to 15 April every year and I always made it a point no matter how busy I am, I always go back to Thailand to celebrate Songkran as Thailand is now my home. In fact, I consider it as my real home now compared to Singapore and Korea.

The nun at the meditation centre was so gracious to allow me to come back a few more times, despite me not having a workaway account. Afterwards, I also did a workaway at a monastery in Myanmar where my sister took me there last November, and we taught the children and built the monastery like painting and gardening. Some of these children were orphans and very underprivileged so it's such a meaningful cause to do something so rewarding for something you love and you can see the results live in your face when they learn how to finally speak a sentence of fluent English or how to use a computer.

When I was at Myanmar, I was touched by the kindness, generosity and friendliness of the locals. That was a country and culture untouched by tourism, and people just being genuinely genuine, no hassling and trying to sell you stuff or ripping you off. That's when I learnt that to truly experience a country's local culture, you gotta live like a local and the best way to do it is to live with a local so you can see it from a local's perspective and going on off-the-beaten tracks instead of actually going there as a tourist and doing touristy stuff.

I have massive interests in Russia's history and culture, the World War and national heritage of countries.

I am a big fan of Eastern Europe and when I was studying in England, I always travel frequently around Western and Eastern Europe especially the East. When I was in school, I am a big history buff, History is one of my favourite subjects and I excel in it. I love national heritages and what I like about Russia is that it has so much history and national identity - the Tsars, Bolshevik Revolution and the history of the USSR. I wish my teachers taught me more about this but a lot is just focused on the West, I go to a British International School and unfortunately, the West always seem to portray Russia as some kind of big bad evil wolf and from a very young age, I've learnt not to trust any mainstream media. This is probably due to my background in hacking and history so I've learnt to examine both sides of the coins and do research more about something before just blindly listening and trusting what you see on the news.

I'm also a football fanatic, huge fan of Man Utd and Die Mannschaft, the Germany National Football Team. I actually travelled a lot just to follow and watch them.

For the upcoming 2020 Euros, I'd go and it would be hosted in 16 different cities and I already won the ballot to the ticket for Saint Petersburg, Russia. :)

I like War films and documentaries due to my interest in history. One of my favourite books growing up is The Girl in the Dragon Tattoo as being a hacker like her, I can relate to her growing up as an introvert and spending more than 15 hours of your time everyday on the internet, you feel lonely sometimes but yet invincible as one button from your keypad can destroy anyone or anything. I love the whole plot of the book. She's so intelligent and meticulous, very riveting read. I'd recommend anyone to read this book if you haven't.

Throwing eggs at the Russian police

Playing pranks on the Singapore police

Almost got expelled from school at 10 as I hacked into my school's website and defaced it with the Germany National Anthem. Did it again at 18 to my university's website, was suspended for a week.

There's just so many crazy stuff I have done that I cannot possibly list them all. Some of my friends said thay my life can literally be made into a movie. I don't conform to our society standard of working a 9 am to 6 pm job and I just live my life to my fullest trying to complete my bucket list. I'd rather die at 40 and live a crazy and fulfilling life then die at 100 and live a boring and predictable life.

Here's a few crazy and dangerous adventures I've been through:
2001- I was in New York when I witnessed the collapsed of the World Trade Center 9/11.
2011 - I was in Japan and I survived a magnitude 9.0 earthquake was running for my life while the building collapsed
2014 - I witnessed the Annexation of Crimea by Russia and saw civilians being shot in the centre of Kiev

I started programming when I was only 6 years old and by the age of 15, I was already creating websites, mobile apps and develop digital marketing campaigns for top athletes and A list Hollywood actor as well as for the top Hollywood production companies’ movie releases. If you need any marketing or web development/IT help, I can help you with it. I've even successfully made a good friend from an unknown aspiring actor to a wildly successfully Hollywood actor now so I can help you with social media marketing like teaching you on how you can brand and market yourself on Instagram to get more followers.

I can clean and cook for you at your house too. I'm not the best cook but I love to cook and I always try my best so I think I am okay. I love animals too so if you have any animals, I can look after them for you.I'm a keen and passionate learner, and I always try to do the best I can and love to put a smile on people's faces.

If you host me, in return I can host you at these 3 countries - Singapore, Busan, Bangkok

I live in Bangkok these days. I spent more time in Bangkok than Singapore in the past 3 years so if you are travelling to Bangkok, I can host you. I live in a one bedroom studio condo so you can sleep on the couch. If you really need a bed, I can give up my bed for you as I am always out partying till the wee hours of the morning anyway.

If you are travelling to Singapore, I have a big couch in my living room and an additional bed in my room. I live with my family in Singapore and you will be living with my parents and 3 sisters who all have their own rooms. One of my sisters is travelling most of the time so there is a possibility you can sleep in her room.

If you are travelling to Korea, I am from Busan and I live there for 5 years, you will be living with my aunt and grandmother. There's no room for you so you have to sleep on the couch.