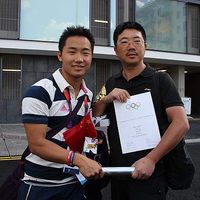 Building a social enterprise in China

Leon, founder of Suchen was born in Sichuan province China and spent much of his life in the UK. He studied Engineering Science at Oxford University and has also attended Tsinghua University. Suchen's concept of convening and developing high potential young leaders around the sphere of entrepreneurship and sustainability was conceived amidst the devastation of the 2008 Sichuan Earthquake whilst he was a volunteered there. He was selected to be on the "2041" Expedition to Antarctica which really ingrained his attitude about the importance of sustainability. His work in the environmentalinclude representing the British Council as a delegate to attend both COP15 and COP17. Currently Leon is a co-founder and director of byin.com, a website and application opening up the world of Brazil as a travel destination for all.

With a love for engaging with social innovators with the ambition to change the world, he is the founding ambassador of Sandbox Network in China. His passion for entrepreneurship began when he won an internship to work for Peter Jones (of Dragons' Den) and later being on the founding team of the Gateway student newspaper. Since then he has won two UnLtd awards for social enterprise as well as the leadership award from the Royal Academy of Engineering. Leon has been active as an ambassador for Tallberg Forum, One Young World and is a Global Justice Fellow at Yale University Macmillan centre for International and Area Studies. He has also been involved in organising 6 TEDx conferences in Asia and Europe and has been a keynote speaker at Suchen's Windsor Castle Conference, Cornell China Conference as well as at TEDxOporto and TEDxKPMGDelhi (KPMG Global New Partners Conference). He was a judge 4 years running at the British Science Association's national science contest since being awarded the prize for Young European scientist of the year back in 2006 at the Royal Society. In has worked on IBM’s Exteme Blue he developed a Smart Cursor for people with disabilities and as a team of four, successfully filing two global patents within three months and was voted top team in Extreme Blue Europe 2011. Leon was twice a delegated in the EU China Year of Youth program and a fellow of Power Of Youth.

Aside from entrepreneurship, Leon is very passionate about environmental sustainability and has represented British Council as Climate Champion around the world including at COP15.In his spare time Leon loves to travel and play sport. He has placed 5th at the 2006 Lausanne world championship for Triathlon and has completed endurance events including as the Great Wall Marathon and Ironman China. Leon also speaks fluent Mandarin, Spanish and is learning Portugese. His passion is to explore and learn about different places and cultures.

Travel is the only thing that you can buy that makes you richer :P

I have couchsurfed in Kota Kinabalu with a guy named Faz and many others. It was a great great experience.

Been to antarctica!
Been to over 40 different countries and all continents
Came 5th in the 2006 World Triathlon championships for Under 20s men