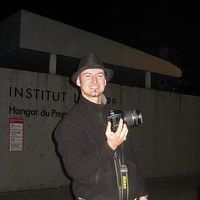 ...in order to prevent intercultural misunderstadings...

If you're a couple or a guy, you can still try your chance though.

A fantasy/romance feature film currently in production (first 33 mins of the film):
https://vimeo.com/140942781

A Freek is a new super advanced gender, son of the illegal fiedish relationship between a strong Camembert and an innocent Feta.

A bit like the X-Men, but better, with more Super Powers! (I can slime my enemies with genetically modified melted Camembert... and freeze them with Feta).

I believe in Greek philosophy... which is much better than German philosophy, by far... Check out this to be convinced:
http://www.youtube.com/watch?v=ur5fGSBsfq8

Ok, let's start to be serious, I'll now attend a serious presentation of my self:

- crazy "PARTY ANIMAL" (most of the times a Leopard, some other times a Polar Bear...) by night.

To make the story short: I'M A LIVING ZOO BY MYSELF! :-p

Before it got sold for a few millions dollars, I've met through CS a bunch of weird people along the years, here are THE MOST DELIGHTFUL REFERENCES people left me. This way, you'll understand well who I am, in through other people's eyes:

"Cedric is a tall man, at least 2m25 high, and when he shakes his head, his lion mane/hair is flying in the rising sun like the Greek flag over the Greek parlement"

______________________________________
"When Cedric came to stay in our village, we immediately understood how great a guest he could be. He would have saved us half of the shrinking job, because his head is so small. Indeed he's a bit skinny, but we all agreed that even if there wouldn't be much to eat, he would be a really tasty dinner, special his bottom which would have been a great appetizer ('amuse-gueule' as we say in here). Shame that he couldn't stay long enough and disappeared in the middle of the cooking preparation. Ced, you come back whenever you want... you welcome!"

- An saturnine astrophysician under LSD.

Anima sana in corpore sano ("a sane soul in a sane body").

They didn't know it was impossible... so they did it!!! (Mark Twain)
(I've done a few things in my life which, once I had done it, looked retrospectively impossible... and yet... I'm still here! ;-).

You must have chaos - and a touch of madness - within you to give birth to a dancing star. (free interpretation of Nietzche's "Zarathustra")

I registered on a Wednesday evening, I remember it as if it was yesterday - or maybe was it yesterday? As I've said already, I've got memory problems...

- Thursday - 9pm: I go for a drink with Myrto, an adorable girl - and one of my best friends nowadays - who had read my invitation on the CS Thessaloniki - Greece - forum.

- Friday - 2.30am : Myrto offers me to go the next day for a CS excursion to the top of Mount Olympe.

- Friday - 6pm : I'm on the highway to Olympos with Myrto and a German girl.

- Saturday - 9pm : I'm sitting together with 24 other Couch Surfers (from 8 nationalities) at 2.780m altitude, in the refuge right down from Mytikas, the mythic summit of Mt Olympe - and the official throne of Zeus!

- Sunday - 2.30am : I'm laying down in a sunchair next to Pantelis, Kostas and Patty, watching a great storm by night, with plenty of thunders and lightenings all around us.

- Sunday - 11.30pm : Pantelis offers me to join to go with them to his island - Kefalonia - the next day to stay at his family - on the other side of Greece!

- Monday - 5pm : I'm on a beach in Lefkada, enjoying a bath in the incredible white-blue water with the guys.

What else can I say?

Hummm, maybe that, right there in Olympos, I met several of the best friends I have today.

Incredible I'm still alive after so much excitement through this website.

Shame they've sold CS for a piece of bread (actually 21 Millions Dollars... a bit more than what Judas got from the Romans): Casey Feyton is my personal Judas, I hope to meet him some day to tell him my way to think!

Everything which makes my mind and my knowledge bigger...

But let's give a few ones: apart from fine arts, I like:

- cooking - my grand-mother was better cook than Paul Bocuse... -
- wine tastings - the best wine of the world is coming from the place where I've been growing up -
- architecture - my plan is to marry an architect, so that she can sign the plans of my future house in the Cyclades islands... plans that I'll design myself, as I really love architecture, an art like cinema or music in my opinion.

MOVIES + BOOKS:
I believe Shakespeare is the greatest writer of all. I specially love "Richard III" and "Mac Beth", I'm currently working on a voodoo adaptation of Richard III to be shot in Nigeria.

"The Little Prince" by St Exupéry, the most meaningful novel of all times for me...

"Alice in WOnderland" by Lewis Caroll, the most crazy and enjoyable one... (go to Kalder Olzig club in Berlin to enter into Wonderland for real!)

Actually I've already adapted these last two books into movies written, shot and edited in less than 48h (48h Film Festival), with only Couch Surfers as actors and technicians.

Alice in Wonderland ("In through the Corridor of Wonders"):
http://www.youtube.com/watch?v=bx1zCyuc1bM

BOOKS:
I'm in love with anything written by Albert Camus, because he speaks about the deep nature of the mankind...

I've read - and I actually still owe, standing religiously on a shelf at my parents' - the 44 novels of Philip K.Dick... the best being, according to me, "Ubik" and "The Three Stigmatas of Palmer Endrich"!

In general I've been quite in Sci-Fi at some point - and I still like it -, enjoying specially Asimov, Simak, Herbert and the fabulous and underestimated French writter Stefan Wul (read for example "Trap on Zarkass" to be convinced!).

Of course I loved "1984" - which depressed me for quite a while... - and "Brave New World", specially for the political meaning.

I do love political writings, for example the books from Voltaire, Diderot, Montesquieu and all the great French philosophs of the XVIIIth century.

I enjoy the irreverence of Montaigne and Rabelais.

...and the madness and absurdity in Kafka and Jarry's novels and plays.

Well... I've done quite a number of stupid things in my life...
For example: I jumped on the stage at Moby's concert in Rome (for the 40th Anniversary of the 1st man on the Moon) in front of 40.000 people, dressed as a Moon man, avoiding high level security to reach the Milky Way!!!
It's here:http://www.youtube.com/watch?v=YyyflFhdfoM(look at 3'34", you'll get a surprise...)The evidence:http://www.couchsurfing.org/image_gallery.html?id=2QJU6L5&amp;folder=237231&amp;skip=0#5504891

I passed a Magnum gun and 12kgs of Feta cheese through Athens International Airport together with a 35+kgs bag without paying a single cent of additional fee! (ok, i spent some time in the police station of the Airport... but I went through).But the real performance is that I was travelling with... Easy Jet!!!

I almost won a "bathtube race" on the Saône river, before sinking 5min before the arrival, in front of 10.000 people! (I almost sank together with the "boat" by the way... the bathtube is still laying in the bottom of the river!)

Apart from this, I used to work as a photographer, I still have plenty of equipment and I can teach you how to frame or to play on the depth of the pictures.

I can also teach you tennis, ski or several other sports I practiced in competition over the years.

Because of my job and of my love for cinema, I'm also quite into movies and I can take you in my team when I direct the next one...

For example, I've taken part several times to the 48h Film Festival in Athens, in Rome and in Lyon. We won a few prices. Here are some examples: