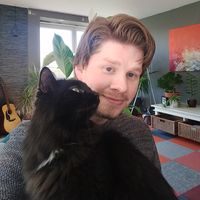 I moved to Rotterdam in 2015, after living in Delft for 9 years. I really like to interact with people from different backgrounds and CS seems to be a great tool to do so.

Last year I did my first solo road trip to München and Austria and had the best time ever, mainly because of the freedom of not following an itinerary and the randomness of meeting people when you're traveling alone. I have not surfed myself, but have hosted a few times now. I think it's great!

I work in a couple of startups, all involved in sustainability, so I'm very knowledgeable about that. Because of this, I decided last year to become vegetarian. I didn't expect it to be so easy! I also decided not to go on airplanes for a while. I have so much left to explore in Europe and even in the Netherlands, I have to do that first!

I'm not a big planner. As the future seems to be getting more and more uncertain, I mostly live by the day and just do the random stuff that I feel like doing that day. If you don't plan, random opportunities present itself and you're free to pursue them, is what I believe.

I'm also a realistic optimist: not everything goes the way I want it to go, but everything will work out in the end. Better to try and fail, than to not try at all. At least you'll have a new experience!

IMPORTANT:
For requests, don't send me a copy-paste message please! I get many requests, so an impersonal message has a high chance of being declined without reply. Also, I'm not on couchsurfing to host people 'wanting to stay for a few days until they find a place to live'. You can try, but a very high chance that I'll decline.
If you're here as a tourist, or visiting for a conference, job interview etc and want to combine it as a touristic visit, that's all fine! Please also read the 'my home' section!

I'm interested in meeting people from all over the world. When I'm traveling I usually meet people in hostels and during pub crawls and I hope that that will also work using couchsurfing!

I like culture, exploring and knowledge in general. That's why I like to just roam around a city I'm visiting and still do that in Rotterdam too every once in a while. I also like to visit museums. I have a Museumkaart, so if you're planning on going to a museum nearby and want some company, hit me up and I might join you!

I also play waterpolo since I was 7. It's such a great sport!

Joined a police patrol in the back of a police car in Brooklyn once.