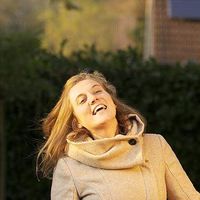 Love Antwerp, music, binge watching, bars, cycling and offcourse for the reason we are here: travelling.
I am veryyyy curious, like jokes surprise surpirse and so on...
I come in peace and I’m on the sunny side of the street most of the time, BUT studying isn't over yet so I might as well sit here and decompose for a while...

I have done some couchsurfing in 2011 one time in Germany and Belgium. Great people, great cities! I'm living in the centre of Antwerp the last half year, so I've made my profile active again to host :)

The outdoors, tennis, cycling, running, MUSIC! Moviessss
Love going to concerts and comedy.
I'm not such a big clublover, I rather prefer bars where you can scratch off the browness off the walls.

This summer I'll attempt some sailing again. So to all the sailors out there: maybe you could teach me some knobs or something :)