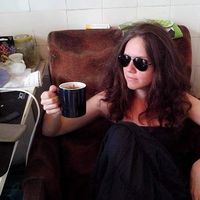 I'm a musician. Studying commercial music performance in London :p
I love meeting new people, having fun and traveling to get inspired :)

I have a lot of experience hosting and surfing. While I was living in Lviv (Ukraine) I could show Lviv to travelers and drink a cup of famous Lviv coffee or not less famous Lviv beer ;p Now I can show London to you, at least the places I'm familiar with.

Movies: "In Bruges", "The Boat That Rocked", "Hot Fuzz", "Shaun of the dead", "The Phantom of the Opera"...
Music: jazz, blues, electronic, classic rock
Books: "Flowers for Algernon", "Surely You're Joking, Mr. Feynman"

Organized a successful tour (10 concerts in Poland, Ukraine and Moldova) for my band, which have been existing for only half a year at that time :) That was fun!

I can teach you how to make even the most cloudy day happy and fun haha!
I want to learn cooking, Polish language, salsa.

I can share with you Ukrainian traditions, including heavy drinking :D joking! maybe.. I can share my stories and experiences, I can tell you why one can unstable music career over career in IT.