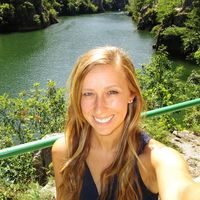 Hey! My name's Lisa and I currently live around an hour and a half outside of Toronto in a place called Waterloo. I've lived lots of different places in the past 5 years, a new place every year, including a year in Uganda, a year in an isolated native community in northern Ontario, and a year in Toronto where I'm originally from.

I love meeting new people and sharing experiences, and couchsurfing is an awesome way to do that!

I have had lots of wonderful couchsurfing experiences, and would love to be able to pay it forward by hosting/meeting up with other travellers in Toronto!

Petting a rhino in Uganda, surfing in Australia, and climbing the Great Wall in China.