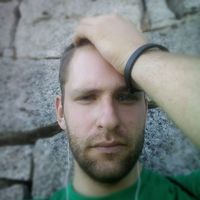 Hello, my little curious friend. Let me tell you a story.
Ones upon a time, far far in the cold north, there was a child. A young boy. He was really friendly and curious all the time, what usually brought him problems. But not as much as his older brother, who they didn’t get along well. They were rivals, for mom's love. While older brother was conquering mother's love, little me was carving his own path. He was quite slow at… No, no, no. He wasn’t slow, he just needed his time to truly understand, estimate things that others looked so easy, like girls, alcohol, cigarettes and else. Usually, he was saying, that do the things you love or you need, but not the things others think of you doing.
Still, while he grew up and his life adventures grew, also grew cold around him. Some times in a far far north can be so cold, that peoples harts freeze and they become cold wombling, gugbling creatures, that want to steal warmth from your hart.

For big me, who now had grown up into a big, tall guy, the only options against this coldness to reach his hart were either train himself or hide. And he hid. He hid his hard deep, deep inside under some walls, leaving a path just for true good people to come in. He was also learning. Learning a lot about life, other, skills to have, traveling, adventures. Love for life and new adventures was warming his hart for quite some time. Until one day, he got tired and opened a door. A door to another kingdom. Kingdom that was so far away that you had to cross 9 lakes, 9 mountains, 9 seas. 9 other kingdoms…. Or if you go straight, you need to cross just a big, big ocean. There he found truly lovely and friendly people. Other people say that this country is the best in the world and people are the most polite and friendly in the big hole round ball that he lived on. While little guy thought his journey will be hard and dirty, the big guy understood that the journey will be hard and dirty, the reward will be amazing. Reward of having such an interesting journey.

In the new kingdom, he started learning new things. New skills. He always loved getting lost in nature in his old village, but now he had a much bigger place to get lost in. True love for nature, animals, trying new things, going to explore, adventures, connection to other good people lead him through his last years of his jumping around that little ball other people call earth, while he is calling his home. Sometimes he feels a little lonely as he is going alone, but old friends and thoughts about finding the one to hold hands with to support each other, make him bounce with a smile in his face.

Are you still with me my lovely reader? If so, please look away for 30 seconds from your screen and blink 10 times, coz your eyes need rest sometimes from the gadget that you use to read this story on.
If we would check up on our adventurer now, he is on the edge to the next step in his life. Or maybe he already has done that. Adventures and traveling was an amazing part of his life that he has and event some parts haven’t dreamed while he was young while watching these adventure movies and reading books. He loved books. He still loves them now. But now, he reads more about this that is real, things that he can use. He loves to read about skills he can gain. He is still the same curious little guy who sometimes (sometimes the sometimes becomes a lot) do silly things, adventurous things. If books development books teach him and different variety of music motivates him, movies keep his hart open. Movies about love, friendship lets him be opened for opportunities.

The one amazing thing I have done is that I wrote this text, but if you would ask our adventurer, he would get deep into his memories, coz he has quite a lot of them. I guess he would say that he is more focused on the future, but also he would share some stories about times he faced a fear. Times he climbed towers, buildings of more than 70-80 floor by lather, or jumping out with bungee jump from 134 meters. Now he is in deep memories with a smile in his face.

His future is in his hands. He says everybody has their own future in their own hands. He was, he is and he will be in love with a learning process. He is afraid as everybody of anxiety feeling, but he loves it also. Teach him, give him a challenge, share with him something deep and he will honor, like and want to keep the connection with you. He likes to share what he knows. He knows that what he knows its just his knowledge. But if the person is opened to learning, he will love to share it both ways. News and knowledge is the real gold of life, he quotes. And I finish this story here. The story is not over, but my storytelling time is over. You can learn more about what happened next if you meet, host or surf, the little big guy.

P.s He knows the secret recipe. The recipe for amazing soup that came from old countries old people. Generations by generations it was given to youngsters to try it, enjoy it on a hot day to feel better. Why??? Coz it’s the only Cold Pink Soup in the world. If you will seem a person who deserves holding such a secret, he might show you. If you are lucky enough to taste it, feel like you made a friend. Nothing connects better than a cold pink soup on a hot day. Except Nokia. But Nokia now is over, so….