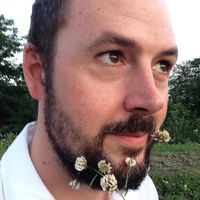 Music. I just moved back home to Yorkshire in the north of England after 12 years of living abroad, in France, Belgium, Sweden and Norway. I'll always be a traveller and, once it's safe to do so, will be out and about once more.

Spend most of my time playing music, meeting people and trying to learn more about everything. I did my first couchsurfing in April 2014, and spent the whole month surfing and hitchhiking around Europe and met some truly wonderful people. Since then I've been taking myself more and more seriously as a musician and doing my day job less.

It's the best community!

Books:
Everything by David Mitchell (Cloud Atlas, etc. - not the comedian), everything by Kazuo Ishiguro (especially Remains of the Day), everything by Orhan Pamuk, plenty of Yukio Mishima, Hellboy (graphic novels).

Films:
All Miyazaki films (especially My Neighbour Totoro) and most Studio Ghibli (especially Grave of the Fireflies), Twelve Monkeys, Donny Darko, American Beauty, In the Mood for Love, Fallen Angel (Wong Kar Wai), You and Me and Everyone Else We Know, the Lord of the Rings trilogy, pretty much all Kevin Smith films before he started directing action and horror... Oh and watch Madventures! (TV series)

Hitchhiked about 1500km around Europe with a double bass.

I can teach some music theory. I also play a number of different instruments, and though I wouldn't be the best person to teach any of them, I could definitely give pointers to beginners/intermediate players! Can definitely give some pointers when it comes to singing.

I love languages - English is my mother tongue, my Swedish is excellent and should be seeing as I translate, I once was fluent in French but need to brush up, and I'm currently studying Russian. So maybe I can throw some of that at you. We can also talk about the influences of the Vikings' Old Norse language on modern-day English in certain pockets of the country. I love that stuff.

Would like to learn any language really. Learning new languages is always fun. Even if I can just pick up a few words or phrases. But I also enjoy learning about how languages work and the history behind them.

I also love to get tips from others on playing. Or learn a new instrument. So if you play anything, let's talk about it!

All of the above. Plus I'm a mean cook; especially when it comes to vegan food.