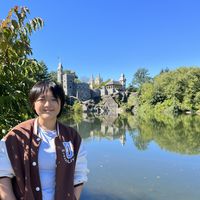 I am Loong, a Malaysian female (she/her). I currently reside in Bonn, Germany.

I grew up in Ipoh, an idyllic city-town in Malaysia further up north of the peninsular, surrounded by mountains and hills and valleys. I moved to the capital -- hectic, busy, bustling Kuala Lumpur when I was 18 to start university and stayed there since to work. I've stayed in Penang for 3 months, one of the more popular touristy islands in Malaysia and loved it there (perhaps even more than Ipoh!).

Malaysia is located so near to the earth's equator that it's sunshine and rain all year long! Yes, you've read that right, sun and rain till there's no tomorrow. In other words, I have never seen real snow up close all my life.

Fun fact! My name, "Loong" means 'dragon' in Chinese. So alternatively you could also just call me Dragon. I won't mind. Oh, and I was born in the year of the dragon, so that makes me........a "Double Dragon", I guess?

There are only three things I like to drink: H20 (Us Malaysians have a fancy name for it: "Sky Juice"), coffee and beer. Yes, all the bitter stuff. If you hate coffee, we can definitely meet up to have a debate about that!!!

I absolutely adore travelling and making new connections. I have 12 countries ticked off my list and hoping to keep going!

I am a firm believer that the true beauty of the world can only be experienced through the eyes of those who have lived through it. I think travelling and living with locals are the most eye-opening opportunities one can ever have. For example, when I was travelling Ho Chi Minh, Vietnam, rather than going to touristy areas like the Notre Dame Basilica or the Cu Chi Tunnels, a local that I knew brought me to the countryside located two hours away from the city centre. The yellow, pebbled trails were extremely narrow and could only fit one bike, it was not paved whatsoever but that was also how I saw the day to day lives of Vietnamese villagers and experienced the best of their hospitality. They gave us free water coconuts to try and refused our money when we tried to compensate them. If it weren't for this Vietnamese local, I would not have had such a tremendous experience in his country.

I believe the same holds true throughout the world. And to me, that is the core of couchsurfing - a community who appreciates and cherishes the joys of not only travelling, but life itself. It's sharing what you have lived through and appreciating what others have lived through as well. This essence of sharing and offering --- "humanity's gift" as I call it, is what I earnestly hope to be a part of in the many years to come.

I absolutely adore any form of pop music, be it C-Pop, J-Pop, Britpop or Europop. Despite being a '00s baby, I find myself jiving to the beats of Billy Joel, Beatles, ABBA, Backstreet Boys, Edith Piaf, Yves Montand and other legendary musicians out there. Being a pianist and clarinetist of my school band has also rendered me extremely interested in any form of symphonies, opera, ballet overtures and concertos.

I love plays, broadway musicals and am a huge fan of crime, mystery and historical dramas. But I also have to admit that I absolutely adore anime movies particularly by Satoshi Kon, Hayao Miyazaki and Makato Shinkai. When I feel unlike myself, I find Uncle Roger's Youtube skits, Jimmy O'Yang, Ali Wong and Gad Elmaleh's stand-up shows the best remedies.

Thanks to a lifelong friend I made who's based in the States currently, I've come to love Louise Penny's novels. I used to binge on the Percy Jackson and Harry Potter series when I was younger. Twilight is overrated and would love to pick a fight with anyone who says otherwise. My favourite though, is Margaret Atwood's The Handmaid's Tale and its sequel, The Testaments. So yes, I have a thing for dystopian fiction!

I've lifted 85 kg on my back! Not sure if I can still do it now that I'm detrained but I used to be an avid olympic lifter!

I successfully climbed a 6b-level wall outdoors. If you're into rock climbing, you know what I mean!

Oh, and I represented my country in a music festival in Beijing when I was 16. Was tons of fun!

TEACH:
I speak 5 languages and can understand 6. If you're keen on picking up Mandarin (very useful in Asia) or Malay (very useful in Southeast Asia) before you travel around these regions in the future, I can help! If you have some translations needed for these languages that I am fluent in, be it for your research or working project, I can help too!

I used to be an olympic lifter so if you're looking into starting weightlifting, I can definitely be your lifting buddy and be more than happy to guide you on the basics. I've also done rock climbing. I'm not as skilled in it but am very willing to go on some climbs with you, be it indoors or outdoors.

As lame as it can be, I have been in my school band for 5 years, and was the head conductor of those two years. Thus if you're keen on learning how to play some music instruments (esp. the clarinet and piano) or interested in picking up some music theory, I can help!

LEARN:
I'd like to learn some simple dishes from your culture. It doesn't matter whether it's an appetizer or dessert, I will humbly pick it up from you!

SHARE:
As a Malaysian Chinese who has lived in Ipoh, a famous food paradise in Malaysia, I can share with you some simple dishes from my culture!

I'm also a big philosophy geek so if that's your kind of thing, whopee yay!

I would also love to share with you all of my experiences travelling around Asia. I'm still new to couchsurfing, but I have stayed with locals in many of my trips, and would love to share what I've learnt in those.

As a token of gratitude, I would be more than happy to treat you to a meal in your locality, to chip in in your grocery spending, or to help you out in the kitchen or when it comes to cleaning. (Many people I know see me as a pretty competent cleaner so to speak!)

Last but not least, if you ever visit Malaysia, be my guest! I'll be ready to host from November 2022 onwards so please don't hesitate to reach out!