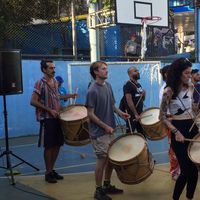 I dont feel as a habitant of one country, like in my case of germany. I feel much moré like a unique part of the world. Where i grew up, which language i learned, which cultural behaviours has Been given to me has in my opinion nothing to do with who i really am. And how could i call myself just as a part of germany. I couldnt do anything for growing up in germany. It s just a matter of Luck.
Thats why I feel lot more like a guy from The world, feeling something that connects us all anyhow..
I really lo e to talk about topics that can help ameliorate The world or just talking about not too serious stuff like sharing stories, talking about books or movies.
After travelling through southamerica for a whole year, mosto of The time on my own, I decided some how to get back to germany to at léast get a degree. So i started studying geography combined with cultural and social anthroplogy.
I like to be active , feel body in The whole what it i. I am a respective person that try to get The perspective of The persons around me.
Nothing is wrong. Everything happens for a reason and you learn out of fails and getting aparte from The comfort zone.
i am really relaxed and dont have to say something all the time, because I read much from nonverbal comunication. i love to enjoy just every moment without thinkin about what i have to say as next .

I love to meet new people. And I really like the idea of couch surfing. I can go to some nice people and they can come to me in Berlin. It's another way of traveling, not like going in hostels and chill out with some other tourists. No, here your really in the life and the culture of the city, in which I'm really interested. I already had many experiences and its allways too nice to enter in someones life for a few days. Borders aré just an illusion so lets all couchsurf!
I also want to show you my house in halle, clase to Berlin, just 1 hour by train.

- and many more, i like creative and experimental music

I like a few books, but more to write my own stuff and learn out of the reality

I start the trip to Colombia without planing anything.

I walked around the dutch island "ameland" with some friends.

I made a trip through the "mecklenburgischen seenplatten" with tiny boats called kajak.

I was on the top of Tenerife, El volcano el teide.

Went Climbing in Tenerife for 2 weeks

Organized An own techno rave

Life and habbits of me and other good persons.

We are all energy. Find
Your right place in the universe
And make the best out of your energy!

my knowledge about social contacts.
Awesome and funny moments.
My house
Cookinh experiences
My tent and hammoc