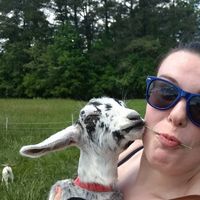 See as many places as possible in the world! Meet as many couchsurfers as possible!!! Have fun! Be happy :)

I am a scientist from France who graduated from NC state in 2016. I now work for a pharmaceutical company in the RTP by RDU airport. I loooove the area! I live south of Raleigh, very close to downtown (~8 mins).

All I want to do is meet new people, laugh, go out, enjoy, have fun... If I can sum me up in few words: I'm talkative, interested by discovering new cultures and countries, positive, always up for party, I love cooking, I like laughing... I have also negative points: I hate false people, liars, people who never smile, elevators, spiders, cockroaches. That's it I think! Hooo I forgot: I'm really happy to be part of this big couchsurfing community :) See you soon!

My favorite quotations:
"Mieux vaut avoir des remords que des regrets" (better remorse than regret)
"Carpe diem"
I try to enjoy life as much as I can!

I go to the events in the triangle as much as I can.
I was one of the organizers for our Triangle couchcrash in September 2018.
I finally got my own place and can open my door to couchsurfers! So far, it has been an amazing experience!

I love Chemistry (I'm an analytical chemist!). I like talking, laughing, travelling, meeting new people, listening to music (rock, RnB, some pop, techno and dubstep!). I love dancing and cooking. I like going to the cinema, seeing my friends. I like sharing my French culture with my American friends (movie, food, experience, life...). I enjoy being in the US and discovering the american way of life. American people are so friendly and nice. They smile all the time! To finish: I love bagels and cheesecake (especially from the Cheesecake Factory).

I fell in love with the US, had to go back to France to finish my MS degree but worked in parallel on the TOEFL and GRE to get accepted at NC State for a PhD.

I want(ed) to parachute jump! I am now scared of height :( I cannot even do roller coasters anymore!

French food and culture! I love Indian/Asian food. I learnt to cook some India food. I'm proud of that! (Gulab Jamun, Pav Bhaji...).
I play the violin too!