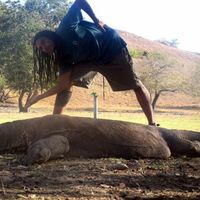 To occupy my mind and heart with love and compassion for those who dont deserve it and to occupy my stomach with large slice of vegetarian pizza with goat cheese on it.

The best way to know someone is to meet them in person and I am not exception to that golden rule.

In strangers I see new friends whom I haven't met yet,including you.

I wanna be the conscience of humanity,wherever I go.

"The one who triumphs over the deepest doubt reaches the highest faith"
(Weininger Otto,1880-1903)

"Be who you are and say what you feel,because those who mind dont matter and those who matter dont mind"
Dr Seuss (1924-1991)

"To Thine Own Self Be True" William Shakespeare

"Blaming Obama for how screwed up the country is a little bit like blaming Ronald McDonald when you get a bad cheeseburger. Neither of them really run the show"

"The greatest want in the world is the want of men.
Men who will not be bought or sold
Men who in their inmost souls are true and honest.
Men who do not fear to call sin by its right name.
Men who's conscience is as true to duty as the needle to the pole.
Men who will stand for the right though the heavens fall."
Ellen White

"Only two things are infinite, the universe and human stupidity, and I'm not sure about the former."
Albert Einstein

"Being honest may not get you a lot of friends, but it’ll always get you the right ones."
— John Lennon

Best gift someone can give you is trust.

I have been hosted as well as accepting guests outside of any official network for ages,only by ear and am still doing it now.I don't believe that anyone should"apply" for couch.Hospitality is fundamental human trait,often forgotten now a days.

As part of my own gratitude for their hospitality to me and their generally welcoming,helpful,open hearten-unreserved nature spirit,mentality,philosophy,mindset and so on, people from the following countries will be almost instantly accepted and will be provided any other assistance they deem necessary:
CHINA,TAIWAN,RUSSIA (including but not limited to any person of Russian descent from any Ex-USSR republic),POLAND,GERMANY,ANY ARAB COUNTRY,ANY AFRICAN COUNTRY (white skin included),
UZBEKISTAN, IRAN, PAKISTAN,NEPAL,INDONESIA,BURMA,
ALBANIA ( Albanians from Kosovo and Macedonia too), LITHUANIA, FINLAND.

Everybody from these countries will enjoy extra priority when sending a request and will get all the help I can possibly offer.

My biggest travel accomplishment is hitching on Silk Road in late fall when Central Asia feels chillier.
Silk Road,the same one that Marco Polo was riding on.It connects Asia and Europe through dangerous Central Asia and it is the shortest land distance between Europe and China.
It didn't change much since that time,honestly speaking.No asphalt,no gas stations,no McDonalds,around ( I call them Mc Craps), Burger Kings etc,only primitive simple path full of mud and wild local,sometimes dangerous people around.
Of course there were good people as well ,otherwise we would never make it,but God also helped us, I must add!So,yeah I've reached China by land all the way from Europe ain't that something!?

I survived terrible car crash in Mexico,where I could easily lost my life,the car I was in flipped over several times,I still can not believe I am alive.
I fall asleep behind the wheel due to lack of sleep and overconfidence.
Local news paper wrote the article about it.

I covered approximately 35 States in USA mostly by hitchhiking in the year of 2010 and 2011. circa 13000+ km by thumb and wrote book about it!
I think I am the first black man ever who dared to do anything like that in United States.(Still waiting to be proved wrong)

On the top of that,I survived 2 years of heinous racism and hatred on all levels in probably most violent and racist country on Earth:United States.
Day didn't pass by without tension and fear of some sort.Thanks to all the good people no matter the color and creed who assisted me in any way.

Once,in Denver, Colorado, just upon arrival I asked a guy who was mowing his yard if I can use his phone .
Shortly after,we made wonderful friendship.He was perfect host for the whole week!

Watched spectacular sunrise from top of Mt.Fuji after climbing it from the bottom.3776m -3 days,come and back.

In southern Chinese Island of
Hainan I was treated from illness of food poisoning for the whole week by random village family from rural area in their own house who didn't speak any English with overwhelming language barrier between us.
It proves that heart is a barrier,not the language.

In Moldova I gave the interview for their National TV station about Couchsurfing.

Personally I apply caution to saying:"try everything once".This may apply to places to visit but not to drugs for instance.
Makes sense?
I can teach you how to hitchhike,
I would like to learn: Vegan baking, bicycle maintenance, train hopping, best dumpster diving spots in your area, survival skills, squatting, gardening.

in Vancouver I can point you out to the right direction where to find free nutritious vegetarian meals,free ,yummy,cooked hot on daily basis.
Hint:
Sikh/Hindu temples.
You can also borrow my bicycle.