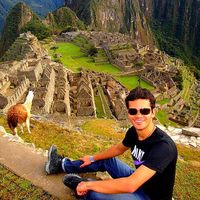 I´m a FULLY VACCINATED brazilian physician who LOVES travelling and meeting new interesting people. For me, the people i meet is what makes some trips so special! I can speak english, portuguese, spanish, a little bit of german/french. I am pretty open minded, love music/movies, and yes, im into social media :D
I went to Burning man twice in Nevada, so i carry a bit of the Burn phylosophy with me wherever i go!
I´m gay so please be gay friendly! And i LOVE karaokes!
instagram @luanintheworld if u wanna see more of my travels

I really enjoy travelling in the "travellers way". Instead of visiting only touristic spots, i like to try local food, go to the places locals go, meet local people and understand about their history. I love culture, but not only the museum thing, also the street daily culture. I´ve met some people in CS when i lived in Canada or was travelling around the world.

I´ve met nice people here, as the one who hosted me in New York in Christmas 2012. I stayed with a very nice guy in Beijing in late 2013. We had an awesome time! And I also met a chilean guy in the University of Manitoba campus in 2013 and we went to a CS party together. I had a wonderful stay in Johanesburg, Los Angeles, Tel Aviv, Jerusalem, Buenos Aires, São Paulo: all great hosts and cool experiences!

As a doctor, i have to study a lot that´s why my profile is so incomplete, lol. i love Youtube i have a channel called luanintheworld, check me out! Also instagram same name. I like traveling, swimming, playing volleyball, learning new languages and reading about any interesting subject.

I LOVE CINEMA AND MUSIC. Seriously, i´m addicted. Ill be glad to show U some of my favorite playlists in spotify, MOSTLY REGGAETON lol. I love dancing.

I visited some Ski Stations in Chile and we ride a bus along the Andes mountains.

I traveled to Europe by myself when I was just 17 years old, and meet friends there.

I went hiking in the Great Wall of China

I went to bath house in Budapest

I went to many thrill rides in Wonderland park Toronto, CA

I went to the Harry Potter World close to London England

I went to some cool Operas in Budapest and Vienna

I went to many castles and churches in Prague, CR
...