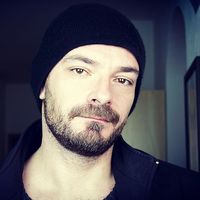 Being a lazy fuck, I go with Hunter S. Thompson:

Life should not be a journey to the grave with the intention of arriving safely in a pretty and well preserved body, but rather to skid in broadside in a cloud of smoke, thoroughly used up, totally worn out, and loudly proclaiming "Wow! What a Ride!”

To find someone ready to open his/her house for you - for no reason at all - or to open your house to a complete stranger and exchange stories all night long - drinking an unhealthy amount of booze - is something plain unbelievable and amazing.
And it happens every-fucking-time.

AS A HOST
I once received a couchrequest from one Hitler, saying he was having a bad time, havimg been kicked out of some art school or something. I declined it (I got a problem with moustaches) and we all know how it ended. So now I welcome everybody, just please don't invade Poland.

Actually, if you a) don't have a sense of humor, b) are easily offended or c) just want to spare money, you should look for another host. Don't get me wrong, I got zero problem with easily offended people with no money, I just don't want them around.

If you're traveling with somebody, do me a favor and don't say "a friend". Give the poor bastard at least a name, for Christ's sake.

AS A GUEST.
Through careful learning of some ancient Tibetan techniques, I learned how to turn myself into a bedside table, so I won't bother you. And you will have some extra space for socks.

Everything, but Reggae and Smurfs (how can a blue midget coming out of a mushroom be a good thing?).

Dude, way too many to count. Anyway, anything with a soul in it, or Liam Neeson kicking somebody's ass.

I give you three.
First time I saw Night of the Living Dead. I was seven years old. Didn't sleep for the rest of the year.
First concert, Turin, 1992: Guns 'n' Roses, Soundgarden and Faith No More. What a gig!
First kiss. Still trying to figure it out.

I can show you the path of the Force, or we can dive together into the Dark Side and get free biscuits.
I love biscuits.
And I'm your father.
Aaaaand your hand is gone.