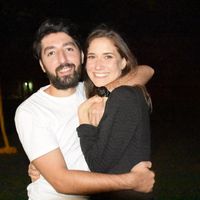 Hi Couchsurfers!! How are you!?

We are Mica and Lucas, a couple from Argentina decided to travel around Europe during this year (2019)...next year...and next next year, who knows :)

I'm Mica, a graphic designer and photographer. I've worked in a marketing and communication agency during the last four years (from 2015) until it's closed in 2019, and I think that IT'S TIME to share and increase my life experience's with other people and cultures.

I'm Lucas, a little crazy man. I obtained an International Trade degree till much years ago, in 2012, and then a postgraduate in 2017. I worked in international trade during 12 years and during my last holiday I decided to plan a big world trip with my girlfriend, so, here we go!!

We believe that Couchsurfing is a different and better way to know places and cultures around the world, whether it's a big city or a corner of the earth, becuase you know nooks and people that you would not know going to a hotel or renting an apartment. The people here, in this comunity, make the diference, they (you) makes the trip an enriching adventure.

Live a week in the Amazon rainforest, something incredible that I recommend to all people!

MAINLY SHARE! Stories, plans, experiences and cook typical food of Argentina, such as the "asado"