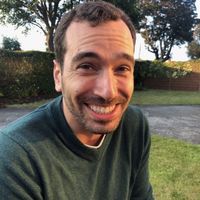 Hi. I’m originally from the us. I’m mixed ethnically and culturally. I’ve lived all over the world. The last seven years of which have been in Brussels. I can be a bit shy, take awhile to warm up to people, and I generally lead an insular life. Currently living alone with my daughter.

Because I’ve had some of the best experiences of my life while traveling, and I think it should be easier and more accessible. I like to meet new people from new places. And I’m also hoping that my daughter and I won’t always just be rattling around the house on the weekends.

Music - I’ll generally listen to anything but I do have a soft spot for jazz and new wave.

Movies - I love film(except horror), but rarely get to watch as many as I would like. Some favourites: American beauty, fight club, the ninth gate, the matrix, the talented mister ripley, the sixth sense, the virgin suicides, dogma. 1999 was a good year for cinema

Books - Either something scholarly, or sci-fi and fantasy. Anything by Neal Stephenson, and like many I’m still waiting for The doors of stone.

Eating roasted chestnuts on the snow dusted and deserted streets of London in the early 90's. Leaned over the precipice along the sheer walls of the Andes and been held aloft by the wind. Getting lost amongst the backroads and small towns of Sicily. Sat out in the rocky arabian desert at dusk and listened to the call to prayer carried on a sweet warm wind. Eaten from one end of an Asian street food market to the other. By far the best, was living in an impromptu communal group in a hostel dorm in Prague.

I’m happy to help out around the house any way that I can. I’m particularly good at assembling ikea furniture, sewing, and baking.

Of course conversation and story swapping.