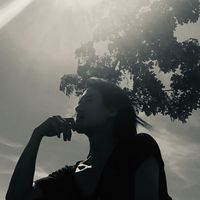 From New York. Lived and studied in London for awhile, and lived in Hong Kong for a short while as a child. I play[ed] music, was classically trained on the piano, and picked up guitar on my own, and now slack. Now working freelance in film. Done a bit of traveling, particularly alone, I think that's often the best way to do it. Have still got so very much left to see. Have never set foot in Central or South America, nor Oceania, and I'd love to visit all of those. The next places I'd love to go are Southeast Asia, Israel, Iran, South America, and Oceania, as well as taking a road trip all through America..... I also want to live in an igloo. But not permanently

and the other too

Most of the time I've stayed with people I know and friends I've met on my travels. As I usually do all of my traveling alone, this often makes my trips a little more interesting, having someone around and to spend a bit of time time with, who also has roots in the city. This goes vice versa--anyone who comes around, I can try to point you in some direction.. I also attend meetups whenever I can when I'm travelling, and at home too. The kind of community I've found is unparalleled to anything else I've seen, and it's a fantastic thing, keeping people of the world in touch with each other.

Walking. I loaf a lot. Especially when it's cold and crisp out

Going to shows--I usually scope out a town by checking out other musicians..

My hope's to create films to make us see, and understand, people; perhaps that's a grand ambition...

anything with soul swing and groove..

On Shelter Island, when I wandered into total darkness, and kept walking, and going.. despite not being able to see even my own feet

the Turbine Hall at the Tate,
Skogskyrkogården

and probably some other things in between..

some people have asked me to teach them american?