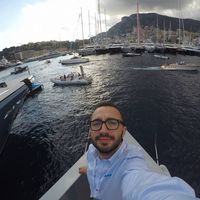 I am a Naval Architect and Marine Engineer. Currently I am working at one of the world-famous yacht builder in Vlissingen, Netherlands so I live in Vlissingen, too.

I moved to the Netherlands in December 2015; first stop was Alkmaar. When i moved to the Netherlands i made a promise to myself "travel as much as you can", I might slightly fail with this promise between February - September 2017 but the general situation is not so bad i guess. Since i moved, i did travel alone or with a friend when she used to live in Brussels. I think I have seen quite nice number of places surrounding where i am; such as: Amsterdam, Rotterdam, Den Haag, Breda, Tilburg, Eindhoven, Zwolle, Haarlem, Maastricht, Middelburg, Giethoorn, Harlingen, Sneek, Brugge, Gent, Antwerp, Dusseldorf...

When i used to live in Alkmaar, i had arranged weekly meetings and had amazing times and gained really nice friends; currently I do not arrange weekly meetings in Vlissingen, where i live, but still making new some amazing friends, also via Couchsurfing.

I can't offer to host you in my place cause of bad conditions but besides that you can contact me anytime you want. Maybe you can see me in your city in quite near or far future, if you have time, i am glad to meet for a coffee or walk around the city :)