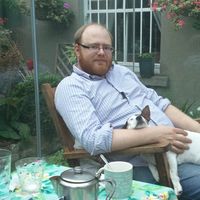 Looking for the craic

I'm a fella, thats about it.

As Billy Bragg said "There is power in a union"

To have a laugh, discover and learn about places and people.

Music: As Louis Armstrong said "There's only two types of music, good and bad" The stuff I'm into would include the following (WARNING interest does not indicate the knowledge or the desire to talk about Smiths b-sides for two hours)
Funk, Delta Blues, Cajun, Trad, Soul, Indie, Hip-Hop, West African (Ali Farka Toure etc.). Apart from that it all depends on my mood.

Cinema: The Witchfinder General, The Mummy, The Maltese Falcon, The Wicker Man, Isle of the Dead, Back to the Future Parts 1-3.

I speak French, Irish and English. I can drive. That's about it really, I can bake banana bread and other cakes and cut turf.