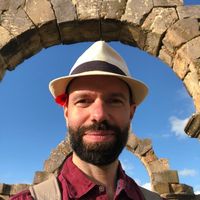 I like to travel and to meet people. I have travelled a lot and I have friends in many countries. I'm open minded, politically involved (left liberal), and I have been a vegetarian for more than 22 years.

Please read my profile before sending me a request. We host preferably during weekends so that we can enjoy the company of guests and do things together, but you are welcome to visit us during the week as well.

I try to participate the best way I can. Hosting and surfing. Organizing events in Stockholm. Having fun together with all nice Couchsurfers I meet! I have had a really good time hosting many travellers in Stockholm.

Friends. I spend a lot of time together with my friends - playing board games, watching movies, having dinners...

Travels. To travel is one of my favourite interests. I have been to more than 100 countries and I like meeting new people.

Politics. I try to make the world a better place - it's almost a full time job. :-)

To hike in the Grand Canyon was great. The same counts for seeing the pyramids in Egypt and the Maya cities in Central America. I enjoyed scuba diving among dolphins in the Red Sea and meeting the mountain gorillas in Rwanda.

I'm very much involved in politics and can tell you a lot about how things work in Sweden.

I like to spend time together with my hosts, and get to know their way of living.