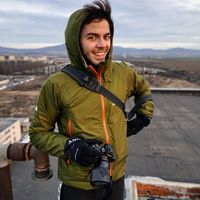 Curiosity and feelings - those are my natural motors, which push me further.

In the past I used to learn a lot of sciences (chemistry and physics, in particular), but after finishing high school I was a bit confused, cause wasn`t sure about my major and future job. Likely, I won a scholarship in Japan and went to the international school there. It was amazing experience of international communication and teamwork. Also, I decided to try out something new for myself and chosen filmmaking as a major. Learning process changed me a lot, I started spend more time looking for details, trying to capture the best moment (not just in film or photography, but in life in general). I understood that every person`s life is really unique and amazing. I heard a lot of frightful and beautiful stories from different cultures and continents. Many of them left imprint on my life as well.

After finishing studying in Japan, I came back to Ukraine, where I partially work as a freelance translator and photographer. Despite this, there are some art projects which I`m working on.
Main one is exploration of interiors of the old buildings in my native city, where i collect photos and historical notes and want to publish book in the future.
The other one - collection of unordinary tombstones. I believe that death isn`t a taboo theme and it may be a subject for the culture exploration.

Inspiration, new experiences or feelings and just other`s people thoughts - that`s what I`m looking for during current period of my life.

What can be better for exploring culture from inside. Diversity - that`s what makes every nation and person really unique. Couchsurfing gives you an unique opportunity - to meet someone. And the rest is a job for you both.
I believe that many genius ideas where born in discussions, on the intersection of 2 consciousness. I consider myself as a tolerant person and totally fine with worldviews which are differ from my personal. Though, I really appreciate arguments and explanation instead of naked position :)

Despite dialogue, Couchsurfing allows you to appear in apartments of a real person, which represents his habits, culture, his past and much more. Isn`t it much more interesting that white hotel`s walls with ridiculous swans on bed?)

Music:
Basically, I`ve started from "I listen what my father does", a lot of old school rock (AC/DC, Metallica, Led Zeppelin, The Beatles, Pink Floyd). Later on I discovered modern bands and new genres, so now I`d probably call myself a polymuse. Tame Impala, Arctic Monkeys, Kendrick Lamar, Moby, Post Malone, 21 Pilots and many, many more...

Movies:
As a beginner filmmaker I try to watch as many movies as I can. Starting from Lumiere brothers, French New wave and to last Oscar winners. Probably film, which impressed me the most is "Fight Club".

Books:
There`re many books on my bookshelf, hope I`ll manage to finish them all. Favourite genres are science fiction (S. Lem, Douglas Adams, A. Asimov and others), also really enjoying novels by Palanik, Pelevin and some Ukrainian writes.
Not a big fan on poetry but trying hard to understand and perceive it.

Freighthopping:
You see freight train which starts rolling, you run and jump inside. Not so hard, isnt`t it? And after you get best views, much wind and freedom. P. S. You`d better be careful with the police.

Bicycle:
Sounds not that amazing but I may argue. Mountain downhill throw rocks and roots provides you much adrenalin and makes your mind really clear. And with road bike you may overtake all cars in jams or reach high speed drafting some trucks on a highway.

Urban camping:
Hostels in Tokyo are really expensive and often not so comfortable. Also at that time I didn`t know about Cauchsurfing yet. So, I basically looked for some peaceful and quiet spots (sometimes it`s hard to find them in the city with population more than 13million people) and just stayed there for a night in my sleeping bag. Few times I stayed in parks under benches, sometimes open garages where my accommodation. It`s not so hard in Japan, it is really safe there and people are usually really friendly to you. :)

I am ready to share my own passions and interests, my culture (history, politic situation and some underground music/films/performs from modern artists)
I would really appreciate any knowledge, experience or crafts, which you may tell me.

I`m ready to help with housework, share my experience and whatever else you may need
Also you may expect host and great excursion from me in Lviv