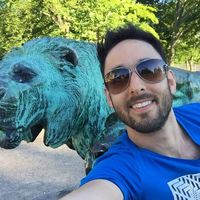 First things first. I moved to Bogota in 2017, so don't get confused if you see references about Washington DC - lived there for 7 years. That's where I used to live and most of my couchsurfing experiences happened there.

Due to the overwhelming number of requests I'm getting every day, I feel like saying the following will save us both some time.

If you're gonna send me a request, make sure that you've read my profile and that your request demonstrates it. Most importantly, your request is a million times more likely to get a positive answer from me if it answers the question: Why would hosting you will be more than just providing you free accommodation, but rather a worthwhile experience?

The obvious exception are CSers with many references since reading their references will answer my question.

Paying it forward by hosting and hosting...

Crazy about music, crazy about life. The older I get the less I sleep... I constantly get the feeling that the day is too short and that one life is not enough...

The mere anticipation of an upcoming trip gives me chills and keeps me up at night. I'm always open to meeting people from different cultures and my curiosity will inevitably lead me to bombard them with questions. I enjoy learning languages and I will ask you to teach me random phrases in yours (mostly curse words, haha)

I'm all about having a great time and seizing the day from start to finish! My perfect day would involve waking up not too early, grabbing brunch, doing some kind of physical activity, do some reading, spending time outdoors and hitting the clubs at night.

I am very open-minded and enjoy all sorts of environments. From latin rumbas to electronic raves to live music bars to stay-home-cocktail conversations which often lead to any of the above.

A clubber by nurture, and perhaps by nature too, I've been clubbing since it was legal for me to do so. I especially like electronic and latin music and I'm all about dancing. My close friends think of me as a "party animal" since I usually dance my ass off and rarely leave a place before I get kicked out.

Although I grew up in Colombia and I'm particularly fond of latin music and dancing (I could teach salsa), my love for electronic music is also huge. I have been to Ibiza (Summer 2013), a couple of Ultra Music Festivals in Miami and to the Electric Zoo in NYC.

1) Do not send me a message, send me a couch request.

3) Do not say "I am interested in everything/anything." Because everyone likes spending their honeymoon hopping between strip clubs and hookers.

4) Do not say "I want to stay with a 'real' American" Did you even bother to read my profile?

1) Do send me a couch request instead of a message

2) Do send me a couch request if you like living life to the fullest. This means making the most out of your trip both day and night! Don't tell me you're too tired to go out!

I've Surfed and Hosted a few times. They've all been phenomenal experiences. Can't get enough of it.

I'm all about having a great time and seizing the day from start to finish! My perfect day would involve waking up not too early, grabbing brunch, doing some kind of physical activity, reading a good book, spending time outdoors (preferably by the sea) and going dancing at night.

Intellectually-charged conversations are always enticing. Topics such as sociology, religion, politics, philosophy, psychology and technology I found particularly interesting. Talking about music, be it electronic, salsa or in between also gets me going, but I'd rather dance. I can easily switch to more mundane matters and also enjoy myself. After all, we all want to relax and have fun after a long and heated philosophical argument.

Languages, history and culture are of great interest to me. I'll have you teach me phrases in your native language and I'll practice with you Spanish, French and Portuguese. I like talking about/analyzing/making fun of cultural differences, so tell me about yours and I'll tell you about mine.

Movies: My favorite movies are the ones based on history (Gladiator, Schindler's List) and the ones that raise philosophical questions (Being John Malkovich, Eternal Sunshine of the spotless mind, Vanilla Sky, The Truman Show, Memento) my latest favorites are a french one called "Cyrano de Bergerac" and a documentary film called "The yes men". I always fall back on classics like "Pulp Fiction", "Amelie" and "Gladiator", among others.

I'd love to teach Spanish and salsa dancing (or any other latin rhythm).

I'd like to learn/master how to play Poker. Among my interests is also perfecting my French and Portuguese.

I'd love to share personal experiences like growing up in Colombia, moving to the United States for college, studying abroad in Paris, being at the 2010 World Cup in South Africa, among others.