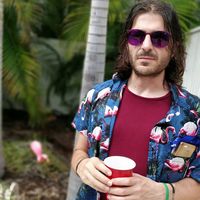 Polytheist with pagan fascinations. Relatively open minded. Southern Italian. Part time musician. I like to sleep, except at night cause I have insomnia.
There are things I'm paid to do (programming/running experiment/analysis), but most of the time I do other things like mind-wandering, playing guitar, writing with illegible handwriting, drawing comic strips with stickmen, occasionally drinking. I can do animal sounds as well, I do a decent dolphin.

I used to record my own songs, but then I became even lazier than before, so I stopped. You can find some stuff here hhttps://www.youtube.com/channel/UC6xuw7AztfB4rguKdfIpwMQ

I'm darwinist and I believe we are sufficiently smart animals with self awareness. I don't think we should save every single species on this planet because extinction is part of Nature (and because we are not in charge of these decisions, we arrogant people) and it's older than sadness or pity, although I understand pandas are cute. I like to talk. A lot.

Music, Cinema, Literature, Mainstream and Underground Sports, intercultural Exchanges, discussions about religion, beliefs, food, music, dogs and giraffes.
Legend has it that I developed my fascination for girls from East Europe because of an early exposure to the opera of Krzysztof Kieslowski.

Noir Desir, Infinite Jest, American Pastoral, The Heartbreaking Work of a Staggering Genius, As I Lay Dying (the book, not the band), Tool, Kyuss, Mark Lanegan, Pi, Requiem for a Dream, Memento, Repulsion, Apocalypse Now, The Godfather, The Assassination of Jesse James, Bronson, Hunger and much, much more

I survived to 1 car 1 motorbike and 2 bike crashes. Flipped a minimum of 2 times in 2 of the four occasions. I don't remember details because I got a concussion in 2 of these 4. And stitches. A lot.

I can teach Visual perception, Neuroscience and Synaesthesia. And how to cook pasta.

We can jam, if a guitar or something similar is around. Or I can tell you some stories and legends from old greek and roman times that I had to translate during high school.