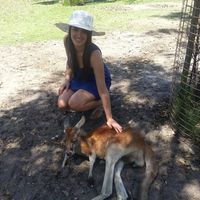 I'm an open-minded / extremely social person who loves travelling and meeting new people. I've recently moved to London after having lived in the Middle East for about 2 years. I love traveling mostly because getting to know different cultures is an amazing experience which I kinda got addicted to; I'm also a massive foodie and I loooove board games or any kinds of games really (I sometimes get a bit too competitive :-P)

I enjoy joining/hosting CS events and occasionally surf as well. I love the couchsurfing community and meeting new people from different backgrounds and cultures,

Music: Bob Dylan, José González, Hozier, Bon Iver (but I listen to stuff in pretty much every genre but techno ^^)

- I hitchhiked through pretty much all of New Zealand

- My siblings, our friends and I were chased after by a Cassowary mom

I have learned not to judge people for their opinions or beliefs but rather try to understand where they are coming from and what made them feel / think that way. I don't believe that anyone is inherently evil and everyone has a fragile little princess living inside them. ^^