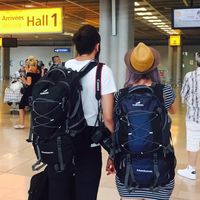 Hello everyone ! We are Mariam and Sofiene, two tunisian young people, friends, colleagues and partners. Respectively 28 and 30.

We love traveling and discovering new places. We are always wondering with backpacks and photographing materials as we create videos of all our trips.

* We have two dogs, so please, if you have any problem with that, avoid us*
* We are collecting fridge magnets and snowballs from all over the world and would be super happy if you bring one*
* We do not allow smoking inside the house*

We are on Couchsurfing because we want to meet new people, not only to host them but also to hang out and have some fun.
We also travel a lot so, we are here to find some nice hosts all over the world.

Sofiene is a professional photographer, he is also passioned by video and photo editing, motion graphic design and... cars.. or his own car haha He also closely follows Hi-Tech and he is an Apple guy. (Yeah never mind trying to convince him the new Samsung has more features)

Mariam is the typer ! She just can type and translate a thousand of words a day :D She loves dogs and cats and all the animals of the planet, but still not Vegan ! She loves cooking so your belly will be well treated in your stay (Well if she has the time haha)

Anyway, we will let you discover many things when you visit us ! Or when you host us :))

We love Music. Any kind of music that is good to be heard. We don't have a particular thing for only one artist. Our playlist changes every month.

For movies, I think we can all agree that "Fight Club" is just... Great ! Other movies we can watch, again and again an again would be "The Wolf of Wall Street" and "Catch Me If You Can" and if you ever come across "I Am Sam" or "The Terminal", watch them !

- Skydiving in Dubai (UAE)
- Going in an over 1.5km high cable car in Monserrat in Barcelona (Spain)
- Trying Space Cakes, Heineken Experience and The Ice bar in Amsterdam ALL IN THE SAME DAY (Netherlands) - Going to a Rock Festival in Cologne... The same day we left Amsterdam (Germany)
- Sleeping on the same berth sleeper on a night train from Rome to Messina... even though there're two free others... uncomfortable lovely love (Italy)
- Eating weird meals like snakes in Seoul (South Korea)
- Scuba-diving in Hammamet and Kalamata (Tunisia and Greece)
- Hiking and climbing in Ain Drahem (Tunisia)
- High ropes and zip wire in Zaghouene (Tunisia)
- Swimming in Polilymnio Waterfalls (Greece)
- Wall climbing in Kalamata (Greece)

We can share our experience, stories but also anything we have in our fridge!