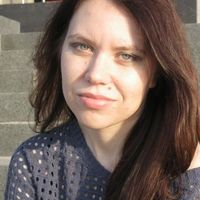 To see a bit more

I'm friendly but a bit on the shy side, nerdy, booky, international - surprisingly, I love travelling and meeting people from all over the world. I've travelled quite a bit and lived abroad for a while, but for most of my life I've lived in Finland. Most of my friends in Helsinki are foreigners, though. The most Finnish thing about me is that I can be quiet when I don't have anything significant enough to say. I can also talk a lot on occasion. I can do small-talk depending on the situation, but love deep discussions on almost any topic.

I do a lot of different kinds of work because I'm interested in way too many things, but if I have to choose, my love for literature and writing always comes first.

I can say stupid things just as easily as smart things, probably more often, and sometimes my brain is phenomenally off, for example when trying to find places... which makes a map my favourity accessory when travelling. Oh and I wouldn't get into a car with myself if I'm driving :)

Life is what you make of it. Even when bad things happen, it's how you deal with them that matters. That's how you know who you are.

I would like to meet new people whereever I go and would love to show travellers the best of my hometown Helsinki.

I've gotten to know lots of great people through CS meetings and CS friends. I haven't hosted or surfed that much myself, but I'm hoping to be able to do all that in different places around the world!

BOOKS: Mostly fiction, but also popular science, such as Dawkins and Dennett, historical books and biographies.

Tough one... So I guess I have to be boring and go with just discovering life, which has been a slow process, but I hope I'm getting a bit better at it every day ;)