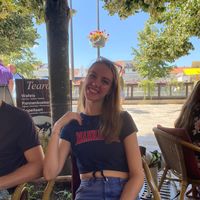 Note: I do not consider CS a datingapp so please respect this and only message me without such intentions. Merci!

Hey!
My name is Marleen and i'm from the Netherlands. I'm a very happy, social, loving, adventurous girl and I'd like to explore the world! Also I love to meet new people, just to make friends and see and learn about different cultures (especially in France because i'm a French teacher in the Netherlands). Exploring the world and having fun with people makes me feel free and above all, makes me the happiest person i can be. Other than traveling and meeting up with people, I also like drawing, reading, dancing (and sports in general), singing and cooking.

Social contacts and the possibility to learn more about countries and cultures.

When I was sixteen y/o, I made a cruise from Miami to the Bahama's and it was never to forget again. Also, every year I go on a holiday with my group of friends, and we usually go camping, so i'm not only the luxury type ;)