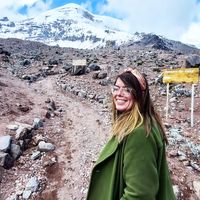 🏼 I'm Marina, 29, French. After living in Ireland, Scotland, England, Estonia, Spain and Colombia, I've just arrived to Quito, Ecuador, for about ten months. Teaching French here. Not sure where I'll go next.

Also I feel like it's important to mention that I am a certified Crazy Cat Lady (that's, like, 90% of my personality) and even though I don't currently have one (I would not put a cat through the ordeal of having a human that can't afford to pay for the vet if it were to get sick or injured), if you host me and have one I will 100% call your cat "my baby" and tell it I love it within ten seconds of meeting it.

I would definitely like to use this year in Quito as an opportunity to travel in Ecuador at the week-end and during my vacations, and would prefer staying with locals!

My music taste is honestly a mess. I will listen to anything with a guitar and a nice voice and a sweet rhythm. You can see my last.fm charts here: https://www.last.fm/user/_Marinaaa

As for movies, I don't really watch them that much, but some of my favourites would be The King's Speech, Moulin Rouge, The Florida Project, Little Miss Sunshine, Juno, and Disney movies such as Tarzan, Hercules and Mulan. I watch many more series than movies, mostly sitcoms because I don't have a good enough attention span for longer shows! Some of my favourites include Brooklyn Nine Nine, The Good Place, Parks and Recreation, and Cougar Town.

Book wise, I am obviously part of the Harry Potter generation. I have kind of a love/hate relationship with the series now, but these books helped shape the person I have become, there is no doubt about that. Other favourites include The Curious Incident of the Dog in the Night-Time by Mark Haddon, The Road by Cormac McCarthy, Lolita by Vladimir Nabokov, The Da Vinci Code by Dan Brown (don't judge me! I know it's trash but I love a good conspiracy theory that points out women are magical and sacred!), Thérèse Raquin by Emile Zola, Tell Me How It Ends by Valeria Luiselli, Balun Canan by Rosario Castellanos, etc.

I moved out of my abusive family's home when I was fifteen. That took some guts but that was the best decision of my life. Other than that I also lived abroad for five years total (that's almost 1/5th of my life), met J.K. Rowling and Rupert Grint, swam at the Great Barrier Reef, backpacked through Cuba on my own, and went vegan in THE Country Of Cheese, France.

LANGUAGES: I can speak in French (native language) or English (C2 level) with anyone who wants to practice. My Spanish isn't as amazing, but it's good enough (C1) to talk with a non-native Spanish speaker who would like to practice, and I'd definitely like to practice and learn from a native Spanish speaker as well! I have only just started learning Portuguese but would definitely like pointers and advice from native speakers as well.

FOOD/COOKING: I am a vegan and am definitely willing to introduce non-vegans to vegan food and learn more plant-based recipes from people who have been vegans for a longer time. Definitely wanna learn more about making my own cheese substitutes!

I can help my hosts out with cleaning their flat, I have done so a few times when hosted. I will also definitely offer you a drink at a bar if you're into that or cook you something! Provided I'm not backpacking long term, I'm also willing to bring you a trinket from my city. And if my stay at yours goes well, you'll definitely have a spot on my mattress if you need it and I'm available if and when you visit Bogotá.