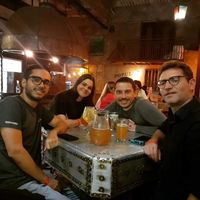 To visit every country in the world, publish my book, open my own english language school/hostel and maybe become prime minister

I am an outgoing individual, who is often prone to talking too much. I love constantly challenging myself and learning new things. I'm fairly easy going , pretty liberal and on a personal quest to visit every country in the world, hopefully living and teaching in a few.

"It is a sin not to do what one is capable of doing" (Though its taken from Jose Marti, a great thinker undervalued in Anglo countries)

Participated in a few events, used it while travelling and have hosted 4 or 5 times and stayed with over 40 people.

Travelling, theatre, hiking, rafting, scuba diving, wildlife, being in the mountains, film, history, politics, film, music, clubbing, dancing, drinking, most sports, any kind of intellectual sparring and generally anything interesting or different I will at least give a go once

hmm I cycled solo Paris to Bordeaux and I ran the bull run in Pamplona. Also had to get a Hungarian collectibles dealer to talk armed Yugoslav guards off me, slept on the streets of seven foreign cities and once had to get a car tyre repaired in remotest Cuba with no Spanish knowledge. Hmm swam a river and broke out of camp to shower under Angel Falls in the middle of the jungle. Climbed Cotopaxi. Travelled through the Darien as the first tourists to visit it. Paraglided in Medellin, hiked the W in Torres del Paine in 48 hours, dived with thresher sharks in malapascua, saw whale sharks, had my nose broken in a chilean village, gambled with crazy drug dealers in paramaraibo, saw loggerhead turtles nesting in french guyana, saw all of the big 5 in 90 minutes in kruger, hiked the annapurna base camp in 4 days, saw blue whales breaching in sri lanka, cycled banos to puyo with totally destroyed bikes,

Hmm would love to learn to sail, become better at languages, learn a martial art, become better than hopelessly incompetent in the arts and dance. Not sure what i have to offer. Boundless optimism maybe and some mental tricks.