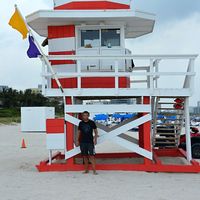 I studied law at the Komenius University in Bratislava. I worked for the government in an effort to improve the functioning of my country. I have left my work, my study, my country, I knew too much about how my country system doesn't work, the system of justice, now I'm on my way with my backpack around the world 🌎

Every summer, I participatied as leader of children's camps in the province Baska Voda in Croatia. I volunteer in the association AMAVET which acts for the whole of Slovakia and which also organizes international events for children and youth, also mentioned camp in Croatia.
Every year I participatied for the Erasmus + project
I participated in the projects:
"Cooltoure" in the Croatian village of Korenica
"Climb for inclusion" in the Portuguese town of Braga
"Closer to nature, closer to my potential" in the mountains in the north of the Czech Republic.
All these projects have given me great experience and opened up possibilities for me, more to travel the world. I met there wonderful people that I will always remember and always be invited as best friends.

And now something about me :D :D
But only briefly :) I like to travel in the future I want to go everywhere.
When I have free time like going to the mountains in winter I practice ice climbing, especially in the High Tatras SLOVAKIA. And also I love snowboarding. When the snow is not so practiced rockclimbing. I'm open to any sport, but I prefer the extreme. If you have any extreme idea, let me know, surely I will go :)

I make too TRAVEL POSTCARDS
22. August I start my way "abound the world for one thousand postcards"
I've created from my photos and also from my design on the back side of postcards,
I started writing the travel blog is still in production I believe that soon done.

,,Some people live in a cube. A cube where they set their limits and they feel comfortable with the possibilities that the cube offers, and most of things that are outside of this imaginary cube are, for them, considered strange, bad or just scary. Will Rogers once said: “Too many people spend Money they haven't earned to buy things they don't want to impress people they don't like.” For me money doesn't matter, it’s not about being rich or poor. People do not become who they are because of money. We didn't grow up with the sense that where we were was where we are going to be. We grow up with the sense that where we were almost didn't matter because we are going to become something greater. Confucius said: he who says he can and he who says he can't are both usually right. Everybody may have another way out of this rat race. I love snowboarding, I love climbing, I love traveling. That is my way to stop the time and escape reality. Snowboarding is like flying over the hills, places without people, white snow and the trees among which you fly. The state of maximum concentration about here and now that makes you forget about gravity. Also climbing can make you try to deceive gravity, It’s a challenge that involves only your mind and the nature, whether you win or lose you will get a feeling of freedom that you can’t find sitting on a couch. And combining these two things with travel can create something amazing. I'm a traveler, a real one. Not a tourist that knows the culture of the country he visited only from hotels and organized trips, who uses money for unnecessary things such as accommodation and transportation. I know that calling them “unnecessary” could sound strange, but the real travel is something that not everybody is made for. Real travel is to have a limited budget and a little bit of struggle on your way, for example, from time to time, sleeping under the stars. The only way for the traveler is to see the countryside and know the local people and their habits, culture, their language by real interactions with them. Sometimes not knowing if you will find a place to sleep is a bit stressful but it is definitely worth it! Mandela’s quote: "If you talk to a man in a language he understands, that goes to his head. If you talk to him in his language, that goes to his heart" that I’m trying to live up to. Learning a new culture by a full immersion in its places, smells, food, people and sounds.
Life begins at the end your comfortzone“ if you still live in that imaginary cube it’s time to leave it and start living." ©copyright Martin KA

I’m on my journey.
"A journey of a thousand miles begins with a first step. The journey of a small traveler with the soul of adventurer. A goal to see unseen, hear the unheard, a journey to get to know the unknown."

Trying to make the world a better place.