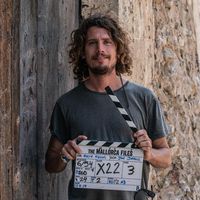 "Martino is a romantic--his words, his writing, his actions."
Ross Connard (I hosted him)

"he's also one of those rare people with a great sense of humor"
Littlehappysun (my ex gf (don't read her last reference!))

My name is Martino, Giacomo, Anacleto, Zaccaria and *Sereno.... unfortunately now I'm serious: those names are the result of having two crazy hippie parents. But please, call me just Martino.
(*Sereno in italian means "calm", they called me Sereno because when I was born I didn't cry...)

I feel myself like a half Italian and half Spanish guy.
Italian because I woke up singing, I eat pasta or pizza and ice creams every day, I have been in Formentera, I play football, and I think Italy is the most beautiful country in the world.
But I'm not 100% Italian because I don't like coffee, I don't wear sunglasses indoor, I left home before 40th, I don't promise my eternal love to every girl I kiss, I'm able to talk without screaming like Pavarotti, and I pay taxes.
Spanish because I lived in London, I have never been in Portugal, I like beer with fantalemon, I don't believe in any God, I will do it "mañana", I love second hand shit.
But I'm not 100% espanish because I don't add an annoying "e" to english words starting by "s", I don't need a siesta, I can leave a pub/bar/restaurant/disco/home sober, I enjoy reading books, Spanish food is not the best cuisine in the world (not even in the top5).

But really often I feel from another world! I'm not 100% human because I don't have any odor (maybe because I don't sweat), I've a sixth sense (but I think I'm half deaf), I don't have regrets, there is not filter between my mouth and my brain, I can stand up and run half second after I woke up, I'm a happy person and not self-destructive, and I always know where the north is (I think I have a tree inside).

Nina, who keeps saying every day to be my mother, is Spanish and lives in Ibiza. She is a dangerous woman. She taught me to think with my brain, always. And also that's better to be angry 10 minutes than annoyed for 10 days.
Gimmi, who (surprise surprise) could actually really be my father, is Italian and lives by the Lake of Garda, in the north of Italy. He is a quiet man. He taught me don't to be invidious, never. And that it's not worth to be angry even 10 minutes.

Someone told me that I'm cruel because I've always called my parents with their names instead of "mama" or "papa", since I was a child....I think the same!, it's terrible, therefore my children will never know not even one of my 5 names!

I am really sorry but I am an usual couchsurfer: I am here because I like meeting people!!

Sorry if I'm not just a saint who offers his sofa to anyone, just to help random people. I wish I had that heart!

I was told several times that this website is only for helping others to find a nice and FREE accomodation...but you should know that I will be rude and I willt try to speak with you and spend some time together! Even if you prefer to spend your day alone and come back just to sleep.

So sorry, I hate giving so much confidence. I should buy a dog but then you may be allergic.

I don't offer breakfast and check in can't be before than 8am. If you want pick up from the airport....many other hosters offer that!
Basically I will be happy to take you around the island IF I have time and IF I want, I am waiting for my taxi license.

I feel bad but I can't avoid to give A LOT of importance to the request. I think I am allergic to copy and paste requests, I will speak about it with my psychologist.

Or maybe I am not crazy but I am just from the old CS generation.

I don't like couchsurfing anymore. If I am still here is just because I don't dislike it that much as to delete my profile.

It used to be great, I met a LOT of GREAT people but something has changed.

Now every day I get 5-6 boring copy and paste requests from people with empty profiles and no references.
For me the most shocking thing is when people read my profile and send me anyway a tasteless request.

Also me....I have changed. I am not really open to host people anymore. Maybe I am too busy, too many friends visiting me, too much work, never thinking about tomorrow... I don't take couchsurfing as seriously as before, and I got a bit superficial too.

Two funny things:
1)Some people did not like MY copy and paste negative answer to their boring requests and blocked me. "Couchsurfing Trust and Safety team" wrote me an e-mail saying that maybe they will need to block my profile as I may be dangerous!

1) When I was a teenager I met a girl, older than me, in a wedding. She was the wife of my best friend's cousin. My friend and I invited her to come with us in a secluded beach, initially she had declined but then changed her mind. We drove through Mexico passing the time by talking about our relationships and sexual experiences.

2) I had just served five years in prison for a crime I did not commit when I kidnapped a young tap dancer and forced her to be my wife. My idea was to kill a fucking bastard and then myself but she changed me and I tried to start a new life with her.

3) I had devised a plan to got revenge on a dyslexic boy who had hurt me: the idea was to leave him naked in a river. During the day we realized that although he was annoying, he was very lonely and had the capacity to be kind and caring.

4) I had invited my family for Thanksgiving dinner, probably the last for my mother, who had a breast cancer. The preparations for the meal were a near disaster when I discovered my oven was broken. With the help of various neighbors, I managed to assemble dinner.

5) I was searching for research material for my thesis on audio-visual violence when my professor died watching a film, then I discovered that it was a snuff film and I recognized a former student of my university.

Ok, of course I'm not talking about my life but about movies....lets see if you know their titles, if no one don't worry, it's not a test, it's just for fun!
If you got scared and did not ready til here ....enjoy Mallorca!

I do many things quite well but no one perfectly, so I have some to teach and much to learn!