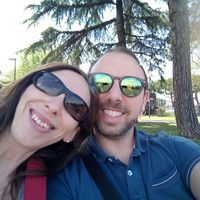 We are a family: Marzio, Silvia and our son, Ettore, born in July 2016.
I (Marzio) work and live in Bologna from Monday to Friday.
Silvia travels around our region for her job a lot.
Ettore goes to daycare and does all the things that a child of his age does.
During the weekend, we're finally together ^_^

We're on Couchsurfing by pure chance. I read an article about it in 2008, and it sounds as an interesting concept. So, we set up a profile. After the winter, we began to receive a certain numer of guests.
We discovered we loved to met people from other countries (not that we refused Italians, but the opportunity to have a glimpse at what life is in distant countries through our visitors was quite a wonderful thing) and we ended to have hosted something around 170 guests in our place in Trieste, until september 2011.
We've also been hosted in France, Germany and Austria.
Since autumn 2011, I began to work in Bologna during the week; Silvia wasn't happy to host people alone so that was a first limiting factor. The second one has been the switch to corporate culture, which I didn't appreciate at all (I was really angry). We kept hosting through other hospitality networks, and we had less guests but of good quality.
After all these years, looking back to all these nice pictures of people we had on our couch... I said to myself that it wouldn't be a bad thing to meet some of them again (and maybe some new friend).

We both love to read, and actually, we met because of a novel.
Basically our house is stuffed with books and comics.
Music also plays an important part in our lives, and I'm cumulating a huge heap of CDs, buying them at second hand markets (music of many different genres...).