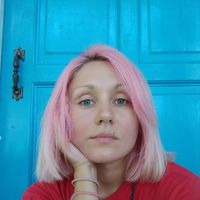 // This part for when I'm home//
I'm 32, I enjoy long-distance bike trips and Couchsurfing (and Warmshowers) has made them a lot more interesting. I live in Saint-Petersburg when I'm not on trips (4-5 months out of the year) and I'd love to pay it forward by hosting like-minded travellers. I strongly believe in reading profiles (that makes for a much better experience), so I'll only accept requests from people that do. That includes My Home tab (to ensure there's no misunderstandings).

(you can see my travel journals here facebook.com/thethighsofsteel
and here in Russian http://vk.com/thighs_of_steel, and instagram @thighs_of_steel)

I work from home, so you can show up usually any time. I'm fine with last-minute requests but can't promise I'll always see them in time to accomodate you.

Generally, everyone can and should be able to do whatever they want to as long as they're genuinely trying to not hurt other creatures and take away their freedoms.

Rope and parachute jumping
Camping on an island in Cambodia (including sleeping and a tent and in a hammock 2 meters from the ocean)
Assisting in making a boat out of garbage and then sailing it
Travelled around Europe for 4 months solo on a bycicle (9000 km, May-August 2015) and around US for 4 months (solo and with a companion) April-July 2016

Eh I don't know I'm sort of knowledgeable about nutrition (although you can't really tell, I carry various amounts of extra fat due to my love of carbs, and bailing on lifting weights)
I can teach you some fun Russian words if you're into that
I want to learn how to do a handstand without throwing my legs up next to a wall

I can make some Russian pancakes and pretty delicious (5/5 stars, 4 reviews) salads, talk Russian to you, impress you with my cursory knowledge in so many areas (I work with lots of texts on various topics AND listen to a ton of podcasts - not to go mad while cycling so much).