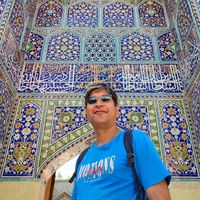 When Annunaki was creating the first Human, I helped him in gathering Apes. So It's very controversial, either I was created by the Aliens or I was there with them before they started the mutation process. I fought the war of Lycans Vs Vampires for three hundred years in which I transformed into a Hybrid. After defeating all, I flew back to heaven. Then, I was appointed to ferry the dead to the next world and I did the job for seven hundred years before I escaped from Davy Jone's locker with a broken wing. I remained alive and satisfied for 150 years before I lost my only wing left, while affected with T-Virus. This transformed me into a Zombie. After wandering for 180 years I met with Count Dracula and we became rivals. I lost my Soul due to the Sin of killing him and since then I am wondering while wandering here and there. Never tried to get my soul back as I like to be a Wanderer.

I hate small talks. I wanna talk about Atoms, death, Aliens, Magic, Intellect, far away galaxies, the meaning of life, the lies you've told, your flaws, your favorite scents, your childhood, what keeps you up at night, your insecurity and fears... I like people with depth, who speak with emotion from a twisted mind. I don't want to know what's up.

For my guests:
Go to the "my home" section, before you send me a request. Nobody likes to host people who even didn't bother to spend one minute on their profile. I DON'T host people who only use CS to find a place to sleep.
All guests from Iran have the priority in my home. First preference:)

I started this journey in February 2011 and over the years it has remained a big part of my life. Met the most amazing people I have ever met, hosted, and surfed with hundreds of couch surfers. Traveled all around Europe using CS and still have strong bonds with my previous hosts and guests.
I used to have a cool HTML-coded profile.
https://www.couchsurfing.com/users/2503709/profile/legacy

1. To travel, to experience new cultures, to meet new people.
2. Sports e.g. Football, Rugby, Tennis, F1, MotoGP, Cricket, Volleyball, Badminton
3. Egyptology and other myths around the world.
4. My language URDU and poetry.
5. Mountains, I love summiting the mountains around the world but also happy with simple hikes.
6. Philosophy of life and behavior Psychology.
7. History, especially second world war.
8. Lions and Orcas :)
9. Climate-related issues and Nuclear physics.
10. Sustainability, Respect towards my environment and methods to reduce my carbon footprint.

Movies: Van Helsing, The Italian Job(2003), Let the right one in, The Gladiator, The Shawshank Redemption, The Godfather (I and II), Pirates of the Caribbean, The Dictator, The Last Castle, The Fast and the Furious, The Underworld, 3 Idiots (Bolly wood movie), The Gods Must be Crazy, American Wedding, A touch of Spice, Scent of a woman, Heat, La vita è Bella, Bandits, Léon: The Professional, Apocalypto, Slumdog Millionaire, Wedding crashers, The Sixth Sense, The Intouchables, Gone Girl, Pretty Woman, The Prestige, Psycho, The Usual Suspects, Memento, Amélie,
A couple of short movies from YouTube :)
1. Little Man- The way Girls are
2. Signs
TV Series: Mind Your Language, Lie to me, Two and a Half Men, The Big Bang Theory, HouseM.D., Dexter, Monk, Friends, Breaking Bad, Mythbusters, Man vs Wild.
I watch a lot of documentaries about the animal world, Space, Scientific discoveries, history (especially second world war), and conspiracy theories.

Music: I listen to a variety of music in several languages from classical to remixes. In general, I only like songs when the lyrics are good but of course, there are few exceptions. I like classical and can listen to it for hours without getting bored.

1. The experience of Sunrise on Morraira Beach, Spain, and sunsets on the sea in Trieste(Italy), Piran(Slovenia), Santorini, Thessaloniki, Patras, Volos (Greece), and Malta. One of the most colorful skies I have ever seen was from the top of mountain Nemrut in Turkey. I practically collect sunsets and sunrises.
2. During my MSc. in Astrophysics, I had the opportunity to look through the Galileo telescope in Asiago Observatory (Italy). Literally the most beautiful moment of my life.
3. Gazing at Alhambra in the moonlight. Alhambra is the only place in this world, I fell in love twice, with a gap of 6 years and around 400 cities in between the two visits.
4. The view of the Acropolis of Athens, with the sun setting in the background and the moon shining on top of it.
5. Climbed up to Zugspitze (highest German mountain, 2962m) with an injured foot. 8 hours of agony but made it to the summit and it was so emotional that tears started to roll on my cheeks.
6. Two months on a small deserted Island in Siberia. At times you are the only human being within a 600 km radius. The temperature drops to minus 45 degrees and if something goes wrong there is no one to rescue. The only connection with the outside world is one unreliable line that doesn't work 80% of the time and even if you manage to communicate they can't do anything unless it's clear weather. You see your jeopardy turns into insecurity and then to fear, this fear intensifies with every passing minute until you reach the threshold, there comes an interval when you sense nothing and then you acquire a great inner peace, one you have never experienced before in your life. The fear of being alone becomes immaterial. You learn about your inner strength of character and the will to survive.
An alternate solution is to drown yourself in gallons of Vodka, which is always around.
7. I have climbed the highest mountains in 20+ countries. Some of them were impressive and others were a joke like the Netherlands. I like to collect these badges :) Except for Moldoveanu, I climbed all my mountains alone and without any equipment.

Only If you are interested:
I can tell you a few things about Planets, Stars, and Galaxies. The past and expected future of our Earth according to astrophysics Predictions. I like to talk about Supernovas when I am in good mood. Also, I might be able to describe a few things about satellites and their launching. I am a climate scientist so talks about Climate change are always on the table.
I have stories from my home country and its traditions. And what about some fairy tales about UFOS and Aliens :)

I want to learn swimming and dancing

My time
My travel stories
My experience of life
Deep conversations
Our traditions
A home-cooked meal.