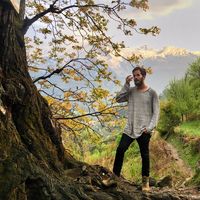 Speaking about myself is not one of my favourite sports. But I hope you can learn something from my references.
I've completed my first bachelors in Business IT and my second one in Psychology. Last September I moved to Rotterdam to pursue a Master's in Entrepreneurship at RSM. In the past I've worked for a small IT research company and a design studio.

In 2014 I had my first job abroad, as a fine-dining server in Mohonk Mountain House. I've spent the whole summer there, during this period I couch surfed in different cities of the US, I will never forget the days I've spent with these incredible people. I've spent 3 more summers in the house since.

In 2017, I travelled through India and Sri Lanka after I graduated from my undergrads. When I'm home I'm either working on a degree, working a job, or planning my next big adventure!

I try to travel a few times every year depending on my budget.
Next I'm planning to visit Indonesia, Vietnam and the US.

This is the fourth year I doing couch surfing, I've surfed in 14 different cities, and I've met amazing people every single time (except for on occasion in Queens). Just to mention a few of them: A home brewer in San Diego, a jewish guy from Pakistan who is a womanizer, a Chinese girl who was teaching close to my hometown before (I've met her in Brussels), an Indian guy in his 50s from UK but living in Canada, who was first generation acid techno fan, continuing the line a wonderful man born in East-Africa with Indian ancestry, raised in Saskatchewan; now he is practicing Hungarian folk dance in Montreal :D

I like indie and electronica, you can find out more about my taste in music nn my Last.fm profile: http://www.last.fm/user/KisMansonKa
Writers: Nabokov, Orwell, Camus,Kafka, Huxley. Hungarian writers: Rejtő, Karinthy

I can teach you Hungarian, but it's often said to be one of the most difficult languages to learn.

I like to talk about beer, home-brewing and the big questions of life. Sometimes all three.