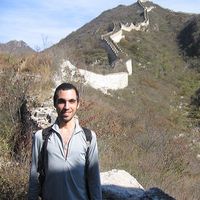 All about me? I'm all about Couchsurfing bebe! I signed up on this site in... 2004 I think, right? It's written up there somewhere on my profile. Had read a tiny little article about it somewhere. Anyway I remember that back then, CS was so small that it took me about a week to screen through the 2,000 something profiles one by one and met everyone.

I was a 19 year old boy back then, student completely bored with his life, a little depressive on the sides and discovering this incredible website was a revelation. I was reading profiles of some real adventurous travellers, legends like the great Jim Stone and Steve Savage! It got me dreaming. Having barely ever travelled, and much less backpacked, I got the travel bug while sitting at home in front of my computer.

I finished school by bits in between jobs and flash trips all around North America, experiencing couchsurfing to the max, living amazing experiences with equally amazing people. But I needed more. 1-2 months trips is not enough, I wanted a taste of the real adventure. Being on the road for a very, very long time.

Well I did, met amazing people, seen beautiful places, learn a lot about other cultures. I even found the love of my life, my wife, while on the road on an island named Cebu in the Philippines.

See every place and try everything

Other then actually couchsurfing, I have been involved with CS for years. I saw CS's volunteering structure start from a few people unoficially sending greetings to new surfers to what it is today. I have been a proud Global Ambassador for North America and one of many very active surfer from Couchsurfing Mecca that is Montreal. I was in the organisation team for the very first couchsurfing gathering and then collective in history which were both in Montreal, as well as for the 2007 snowball gathering.

SURFED:
-Steve and Bill's in New York
- Gretelle's in Los Angeles
- Marco's in Los Angeles
- Hugues and Gabriel's in Quebec City
- Eric's in Seattle
- Becky's camp site in New Hampshire
- Laura and Nauris in Riga
- Celeste, Sebastien and Caroline in Moscow
- Spike in Irkutsk
- Begzsuren in Ulan-Bator
- Marie-Anne and Louis in Beijing
- Jenny and Mark in Shanghai
- Sid's in Hong Kong
- Unofficial couchsurfing in Ta Phin near Sapa, Vietnam

I am interested in cultures, politics, history, good food, music and movies, just the usual i guess.

I used to have a list of stuff i like, and that was pretty cool because sometimes people would come to me and say "yea I love that book as well!" or "that movie was great, did you ever watch..." and such. But I also felt like I was reducing myself to such a few things.... So screw the list. I like a lot of things, and i love to discover new things also.